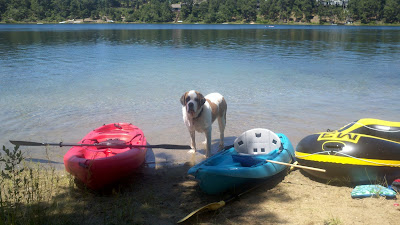 Over the long holiday weekend, we spent a lot of time at my mother-in-law's lake house. Puppy got to tag along with us Saturday, and was fascinated by the small boats the kids were using all afternoon. She sniffed them bow to stern, and swam after the kids as they paddled around close to the shore. 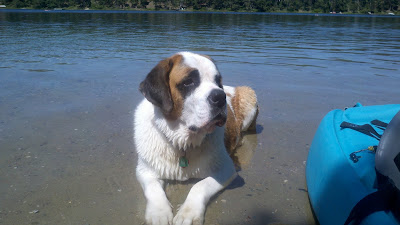 She even planted herself in the water in between the boats, as if to say, "I want to try this! Take me for a ride!"

Alas, she is too big and heavy for the kayaks. Last summer, when she was a bunch smaller, I took her out in the canoe and she nearly capsized me at that point. So I didn't believe her when she claimed to want to go for a ride this year. 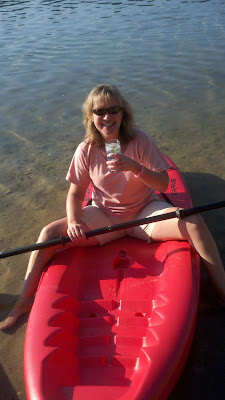 Besides, she would have spilled our beverages. Because when it was time for the adults to take a spin in the kayaks, we took full advantage of the built-in drink holders!

Maybe next time, Puppy.
Posted by Katie O'Sullivan at 6:24 AM