Countdown to Christmas: To Snow or Not to Snow? 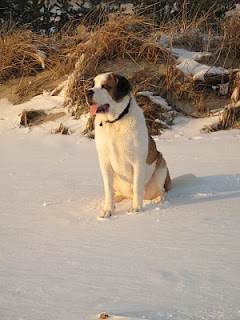 So...... Christmas and Snow. They go together for most people, especially in New England. I guess not so much in warmer climates where there's never any snow anyway. But I've always had a white Christmas... in fact, as a kid, I remember being ultra-panicked the year there was no snow.

How would Santa's sleigh be able to fly?

Would they have to cancel Christmas?

Christmas Eve was a real nail-biter... and then Christmas Morning... my sisters and I got up and sprinted anxiously down to check under the tree... and Santa had made it! And there were three new shiny bicycles sitting there with big red bows on them and BOY, were we glad there wasn't any SNOW so that we could go right out in our pajamas and test out those bikes!!

So... it all worked out. Since we've moved to Cape Cod, I think we've only had one white Christmas. Which is okay with me. And the kids don't seem to mind either way. They don't really like wearing snow pants and boots anyway.

Only the Puppy is praying for snow this year.

How about you? White Christmas or No? What do you prefer?