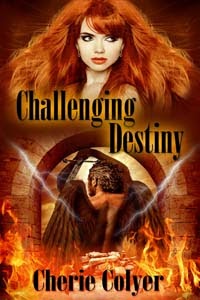 Logan Ragsdale and his younger sister, Ariana, have been marked, chosen to be unwilling participants in a war between angels and demons.

Logan can sense something's not quite right. Like an unexpected chill on a summer's day, he can feel the unseen closing in. He's had these feelings before and, each time, someone close to him died. He's afraid this time it might just be Ariana.

Logan's fears are soon confirmed when he discovers their new friends aren't human, but rather representatives from Heaven and Hell sent to Earth to ensure he and Ariana accept their roles in an ancient prophecy. Demons want Logan to open the gates of Hell. Ariana has the power to stop them, but if she chooses to side with Heaven to spare the lives of thousands of innocent people, she'll damn her brother for eternity.

Together, they must derail the biblical event if they hope to save themselves and the future of mankind...but what price are they willing to pay to keep the other safe?

This is the third paranormal YA I've read from this author, and I'll admit to enjoying her writing style. The dialogue is crisp, the snark is enjoyable and the situations keep me turning pages well into the night. I loved and reviewed her first two books, EMBRACE and HOLD TIGHT (click links to read my reviews.) Her first two books are from Omnific Publishing, and I jumped at the chance to read and review her latest book from The Wild Rose Press, CHALLENGING DESTINY.


Cherie Colyer has done it again, hitting another 5-star homerun with a new YA supernatural series. At least, I hope it's a series, because I'm pretty sure heaven and hell aren't finished with the Ragsdale siblings.

The story is told in alternating POVs between Ariana Ragsdale and her big brother Logan. The two pretend to be normal high school students, struggling with geometry, finding dates for the dance and cutting classes, but they know there is something different about themselves. They have odd birthmarks and a strange connection to each other, as well as the odd ability to influence the minds of others. On their own since their last foster parents met tragic deaths, Logan can always tell when death is stalking their loved ones... and suddenly he's hearing voices again and knows someone is going to die.

Good versus evil, blessed versus the fallen... all Logan and Ariana want is to escape with their lives. I should admit here that I'm a big fan of the television show, Supernatural, and the struggles of the Ragsdale siblings reminded me a little of the Winchester brothers. But in a good way, complete with Sam and Dean's usual side of snark and dash of sass. The Ragsdales aren't Hunters like the Winchesters - just teens marked as pawns in a war they want no part of.

Ms. Colyer shows her prowess once again, with this well-written paranormal tale that's sure to engage and delight. If you like angels versus demon tales (or you're a fan of Sam and Dean) check out this new take on the war between Heaven and Hell. You won't be disappointed.

About the Author:
(From the author's website:)
I write young adult and middle grade novels. I love finding new stories that keep me up late reading. While my favorite genre is fantasy, if the book is beautifully written with characters that come alive I’m all over it.

My debut novel EMBRACE and the sequel HOLD TIGHT are now available from Omnific Publishing.

Find Cherie online at http://cheriecolyer.blogspot.com/
Posted by Katie O'Sullivan at 7:32 AM