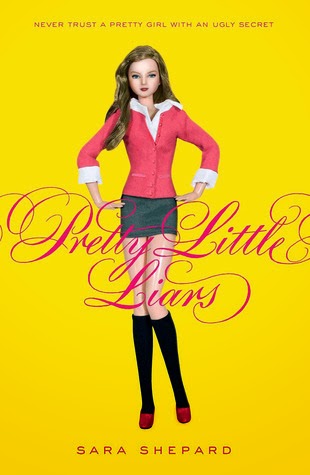 
Three years ago, Alison disappeared after a slumber party, not to be seen since. Her friends at the elite Pennsylvania school mourned her, but they also breathed secret sighs of relief. Each of them guarded a secret that only Alison had known. Now they have other dirty little secrets, secrets that could sink them in their gossip-hungry world. When each of them begins receiving anonymous emails and text messages, panic sets in. Are they being betrayed by some one in their circle? Worse yet: Is Alison back? A strong launch for a suspenseful series.

I always notice the book covers to this series in the YA section. The Barbie-like dolls and bright colors are designed to catch the eye. As the first book in the series, however, this novel spends the entire time setting the scene: describing each of the complex characters, giving us all the various back stories and the twisting and complicated web of lies creating in breakable bonds between the girls.

Alison, Aria, Emily, Spencer and Hanna bonded during a community service project and became best friends. They attend the exclusive Rosewood Day School and live in a well-to-do suburban setting, where wearing the right designer clothes and having the right boyfriend  are more important than getting good grades.

Each character has secrets of her own, and secrets she shares with others in their old circle of middle school friends. Every one of them has a secret that only the ring leader of the group, Alison DiLaurentis, knew, but then she disappeared in seventh grade. Without a trace. The police have given up, and everyone presumes she's dead. Slowly the circle broke up, each girl going her separate way.

Now the girls are all in high school, their secrets safely disappeared along with Alison, until strange messages start to plague them. Emails, texts, and notes that seem to be from Alison because they speak of things only Alison knows. Or knew. Did she run away? Has she come back to taunt them? Or is she really dead? If so, who is sending these messages?

I can see the appeal to YA readers in the detailed descriptions of high school drama laced with designer labels, but frankly all the obsession with labels turned me off.  While the problems and secrets the girls hide make them vulnerable, I didn't feel empathetic to any of the characters as they are all so self-obsessed and selfish. I appreciate this book for its merits, and as well written YA, but won't be reading any more books in this series.
Posted by Katie O'Sullivan at 5:00 AM