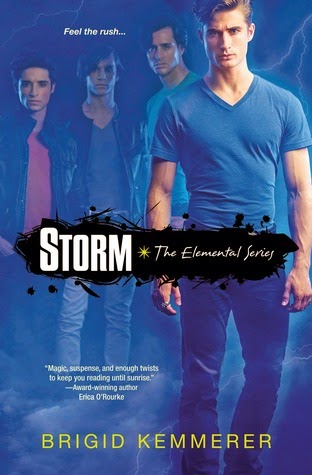 
Earth, Fire, Air, Water – they have more power than you dream.

Ever since her ex-boyfriend spread those lies about her, Becca Chandler is suddenly getting all the guys—all the ones she doesn't want. Then she saves Chris Merrick from a beating in the school parking lot. Chris is different. Way different: he can control water—just like his brothers can control fire, wind, and earth. They’re powerful. Dangerous. Marked for death.

And now that she knows the truth, so is Becca.

Secrets are hard to keep when your life’s at stake. When Hunter, the mysterious new kid around school, turns up with a talent for being in the wrong place at the right time, Becca thinks she can trust him. But then Hunter goes head-to-head with Chris, and Becca wonders who’s hiding the most dangerous truth of all.

First let me gush a little. Wow! I got swept away into this book and loved the characters and plot line! I had things to do which sat ignored until I reached The End because I just couldn't put it down.

That said, there were parts of the writing that made me cringe a bit, but as the first in a series, I'm sure the author was still working out the kinks. Seven more books are now available, and I'm more than eager to plunge back into this world, and happy to share it with others!

This paranormal romance gives us a new magical race to discover, the Elementals. Although the origins aren't fully explained in this first book, Elementals look human - at one point they say they are human, like you and me - but each contains varying amounts of magical force, linked directly to the earthly elements of Wind, Fire, Earth and Water. Like the Bruce Willis movie, there is a "fifth element" that enhances them all. These people live among us and no one can tell the difference, unless they channel their forces. There are also "Guides" (drawn from those who are "fifths") who keep these magical beings in check, making sure to eliminate anyone who becomes too powerful or causes a disruption to their world.

The book starts quickly when Becca  Chandler encounters two guys beating the crap out of Chris Merrick in the parking lot behind the high school. She intervenes and saves him, taking him home and inserting herself into the world of the Merrick brothers, four pure Elementals who are also the hot hunks on the cover of the book.

But Becca doesn't know anything about their world, only that Chris is a junior like herself, and his twin brothers are hot seniors who are friends with her lying jerk of an ex boyfriend. The jerk that spread evil "Easy A" type rumors about her and ruined her reputation. Chris doesn't seem to know or care about the rumors, and a  budding romance between them blooms in fits and starts.

Magical abilities, evil bad guys, high school romance, love triangle, misunderstandings, and a showdown at the Homecoming dance... Some of this might sound formulaic, but I can honestly say I loved every minute of it!

I can't say too much more without giving away plot points, but I thoroughly enjoyed this story so so much and totally recommend for a solid YA paranormal read.