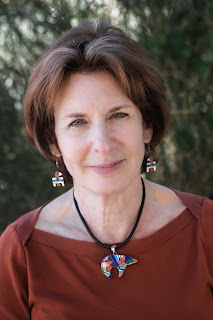 My guest today is Andrea Downing, award-winning author of historic and contemporary romance with a distinctly Western flare. Yes, I mean Cowboys. (Sizzling hot cowboys, of course!) DANCES OF THE HEART, her latest novel, released earlier this year and sounds like a winner. Definitely on my TBR list for review!

Today Andrea wants to share an experience she had recently that she hopes will save someone else from "digital dissaster." Welcome, Andrea!


A DIGITAL DISASTER
Last week I was at a writer’s conference in Bend, Oregon.  It’s a lovely place, what I saw of it, and it was great to reconnect with friends.  So there we all were, happily tootling along in a bus going to the wonderful High Desert Museum, when I had a look at my phone in this bit of free time.  “That’s strange,” I noted.  “I have no cell.  Maybe Verizon is weak out here?”
Well, no.  My pal next to me was also on Verizon and she had three bars.  Wifi luckily was working but cellular, as I was to later learn, had given up the ghost.  Kaput.  Just like that.  At that stage, I didn’t panic because, of course, there was wifi in most places, and the people who NEEDED me—yes, needed me!—were texting.  There was my daughter in Turkey, recently bombed, and ten time zones away.  There were the contractors at my house ripping out two bathrooms in a remodeling project with plenty of questions.  And there was my nephew and his wife in my condo in Jackson, WY, where he’d never been, with the possibility of questions there.  So I didn’t panic.  Yet.
Next morning, after one workshop, when the phone still did not work, I took to my room and contacted Apple via their Chat on line.  Ah, Apple.  You know that fabulous company that knocks out the wonderful phones everyone wants, the computers that are the Rolls Royce of computerdom, and the ever-progressive iPads?  That Apple.  And don’t you believe that their customer service must be equally fantastic?  Ha!  How foolish can one be?  After gaining access to my computer screen and taking me through various steps in an effort to reactivate the phone, and being incredibly rude when I simply asked how long does this take? And after he wrote in red on my screen PATIENCE!!! I had to tell him it didn’t work and he had to tell me to try again and then…he left.  Just like that, ‘Brandon has left the session’ appeared on my screen and I was left with a dead phone.  Completely dead.  Nothing, nada.  No texting, no email, no apps. Dead.
Next free conference slot led me to phone Verizon.  Perhaps, as it was a cellular problem, I should have rung them first—for all the help they were able to give.  You need a new phone, I was told.  We’ll ship it out; you’re covered by the guarantee.  A mix of delight and dread of spending 3 days sans phone swam over me.  I could contact people via tablet or computer and wait patiently for Monday when the phone would arrive in Jackson.  And then, there were the worries about setting it up, whether I could do it, and—quite honestly, this was the biggest dread—fear of hitting an elk or moose as I drove in the dark to my condo.
Well I didn’t hit an elk or a moose and the phone arrived. But when did we get to this point that our lives are on our phones?  Our banking, our credit cards, our flight information, our contacts with the outer world.  When did we get to this point that being without a phone meant a full blown nervous breakdown, pulling our hair out, and drinking ourselves into a stupor? A feeling of isolation so intense that we might as well be zombies.
Now let me tell you one word of advice.  Make sure you have a small paper clip on you at all times.  Why?  Ha!  Because when that phone arrived and I had to take out and replace the SIM card, the only—and I do mean ONLY—way to get into the compartment is with a small paper clip.  Which I didn’t have.  Not a single one in the entire house.  I emptied my bag of flashlight, tissues, umbrella, pens, 2 notebooks, wallet, eye drops and whatever else was living at the bottom, and there was no paperclip.
Please put one in your purse now.  You never know when you’ll need it to reconnect with the outer world.
* ~ * ~ * ~ * 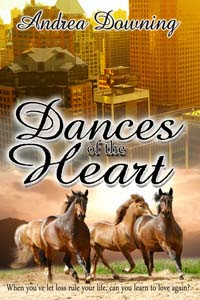 
Successful, workaholic author Carrie Bennett lives through her writing, but can’t succeed at writing a man into her life. Furthermore, her equally successful but cynical daughter, Paige, proves inconsolable after the death of her fiancé.

Hard-drinking rancher Ray Ryder can find humor in just about anything—except the loss of his oldest son. His younger son, Jake, recently returned from Iraq, now keeps a secret that could shatter his deceased brother’s good name.

On one sultry night in Texas, relationships blossom when the four meet, starting a series of events that move from the dancehalls of Hill Country to the beach parties of East Hampton, and from the penthouses of New York to the backstreets of a Mexican border town. But the hurts of the past are hard to leave behind, especially when old adversaries threaten the fragile ties that bind family to family…and lover to lover.

Andrea Downing likes to say that when she decided to do a Masters Degree, she made the mistake of turning left out of New York, where she was born, instead of right to the west, and ended up in the UK. She eventually married there, raising a beautiful daughter and staying for longer than she cares to admit. Teaching, editing a poetry magazine, writing travel articles, and a short stint in Nigeria filled those years until in 2008 she returned to NYC. She now divides her time between the city and the shore, and often trades the canyons of New York for the wide open spaces of Wyoming.  Family vacations are often out west and, to date, she and her daughter have been to some 25 ranches throughout the west

Loveland, Andrea’s first book, was a finalist for Best American Historical at the 2013 RONE Awards.  Lawless Love, a short story, part of The Wild Rose Press ‘Lawmen and Outlaws’ series, was a finalist for Best Historical Novella at the RONE Awards and placed in the 2014 International Digital Awards Historical Short contest.   Dearest Darling, a novella, is part of The Wild Rose Press Love Letters series and released Oct. 8, 2014.  It won ‘Favorite Hero’ along with Honorable Mentions for Favorite Heroine, Short Story and Novel in the Maple Leaf Awards. It has also won The Golden Quill Award for Best Novella. Dances of the Heart, her first contemporary novel, released in February 2015.

Buy Links for DANCES OF THE HEART: