Monday Book Review: On the Hook, by Cindy Davis 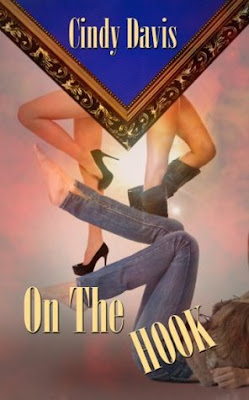 
A Picasso painting, worth a hundred million dollars, disappears en route from Chicago to New Hampshire. Literally--en route. The painting goes missing while the truck is moving. The painting is there, then it's not. It's gone, but it can't be.
Kendra Jean Valentine, underwriting agent for the policy, is on the hook. She scrapes together enough to hire two women to work the case.

Westen Hughes owns a failing pet shop. With creditors phoning daily, she jumps at the chance to earn a bundle of easy money, even though the offer comes from her old nemesis KJ Valentine, who stole everything in high school: head cheerleader, homecoming queen and the star quarterback.

KJ pairs her with Westen's total opposite: Phoebe Smith, a snake-loving, underwear-hating, tuba player with more baggage than Logan Airport.

Ten percent of a hundred million is...well, it's a lot so Smith and Westen join forces on a rollercoaster ride to find one of the world's most valuable paintings.

A cozy mystery with an unlikely duo of amateur sleuths and an insurance agent who cant get out of her own way, On The Hook starts slow but then takes the reader on quite the roller coaster ride. It took me a while to warm up to the three main characters, each with her own unique style and annoying habits, but once I got in the swing of things I found the interactions between them all to be lively and fun.

Kendra Jean (KJ) Valentine works for an insurance company and has just completed the biggest project of her career, the cross country transport of an important piece of art. Except. When they arrive at their destination, the painting is gone. Vanished. Disappeared. Which is impossible, since KJ never took her eyes off the transport van. Everyone wants to blame her for the loss, including her boyfriend, but she didnt do it. How can she prove her innocence and find the painting?

Hiring two women who aren't detectives to investigate wouldn't seem like the best way to recover stolen art, especially when one of them still kind of dislikes KJ  from school days and now owns a pet shop and the other woman is just....strange. But somehow this is the way KJ decides to solve her dilemma.

Westen Hughes and Phoebe Smith are the most unlikely pair of amateur  detectives you'll ever meet, especially since neither has any detecting background and they don't really like each other very much. They are strangers when they meet in chapter two, when Smith enters Westen's pet shop to replace her dead pet snake. Opposites in every way, Westen is sure she'll never see the rude, outspoken, ill-dressed woman again. Except, of course she does.

As the first book in this series, the author takes a lot of time introducing us to each character and showing us why they should never be friends, so when they actually start working together and getting along it feels like a major accomplishment in and of itself.

Once the pair start working as a reluctant team to figure out what happened, the pace picks up and I couldn't put the book down. The mystery had plenty of twists and complications to keep the reader guessing. I'm pretty good at solving these sorts of whodunnits, but this kept me guessing the who and the how until the very end.

If you're a cozy mystery fan, give Cindy Davis a try. In addition to the Smith and Westen series for The Wild Rose Press, she has several other mystery novels from other small publishing houses available (of which I've downloaded a few more. I'll let you know what I think after I finish them!)