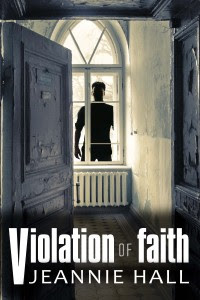 
Lynea Kreig has spent the past three years being invisible. After running with her little sister halfway across the country–away from her abusive cult leader husband–she seeks nothing but safety and anonymity.

When she’s offered a job which would keep her close to her sister, Lynea can’t refuse. But the job puts her in close quarters with Professor Brennan Gage, a man bent on exposing cult leaders to the public. If he discovers her secret, he could destroy the life she’s worked so hard to build. Over time, she finds herself drawn to Brennan’s klutzy kindness. He tells her he loves her, but happiness for Lynea could never be so simple–especially once her husband appears at the front door…


My Take:
Jeannie Hall's debut novel takes readers on a chilling thrill ride, detailing one woman's harrowing escape from the clutches of a megalomaniacal cult leader.

The book begins with Lynea and her sister Cori literally running for their lives to escape the Oklahoma cult they were raised in, but the story starts three years later in Virginia. The girls have settled in a college town and made friends with their elderly neighbors, but Lynea still fears repercussions. After all, the crazed cult leader claimed her for his wife, and doesn't give up easily.

She's determined to keep alert for danger, so falling for the professor she works with is totally a bad idea and not in her game plan. Especially a professor who specializes in debunking cult mythology. How could he ever understand that she'd been an unwilling participant in it all? And what if her husband ever finds her? Because judging by the cover, he's not happy and he's gonna find her!

Jeannie Hall kept me on the edge of my seat through some gripping scenes, staying up way too late while trying and find a break in the tension where I could safely put the book down to get some rest.

Engaging writing and believable characters make this a thoroughly interesting read, with a ton of insight into the minds of both cult followers and former victims. My heart ached for Lynea, hoping against hope that she'd be able to find peace and happiness, but the author kept me guessing right up until the end whether this was a romance or a tragedy.

Want to know which? Read it for yourself.

If you like edge-of-your-seat romantic suspense, you won't be disappointed.