Monday Book Review: Across the Hall, by Kylie Walker 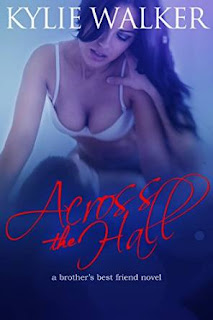 Across the Hall: A Brother's Best Friend Romance
By Kylie Walker
Published February 2016


Jude Falken has just been released from prison on good behavior. He's hot as hell, owns one of the largest fashion empires & has women coming and going day and night. A delivery girl that shows up at his loft leaves him intrigued.

Jude knows better, he swore he wouldn't go there.

After returning from a year long internship in Paris, Jillian Warren is back in her hometown of Manhattan and steering clear of men. Her new neighbor has her curious, wanting to know more. Her roommate & brother keeps telling her stay away but she can't. As their worlds collide, Jillian soon finds out there is a darker side to Jude and she will soon be fighting her own emotions and memories of the one man she left in Paris. Her past will soon catch up with her.

She will be forced to decide. Big brother's best friend or the hurtful memories of her past in Paris.

This New Adult romance was fast-paced and sizzling hot, but could benefit from some editing work. The verb tenses go in and out of present, and while the POVs are third person, they sometimes slip into a first person present narrative. That said, the chemistry between the characters is hot and the sex scenes so detailed that my ereader practically melted from the heat being generated.

The whirlwind romance between Jillian and Jude is filled with potential pitfalls and hazards, not the least of which is in the title: Jude is her overprotective brother's best friend and fraternity brother from college. When she gets home from a summer internship in Paris, Jude is the hot new neighbor across the hall. Sparks fly, and while the brother is away on business for three weeks, hot sex ensues. The brother isn't the only complication in this love story, but this standalone story wraps up neatly with no dangling questions or issues.

If you get bogged down by bad editing and mixed tenses, avoid this book. If you're more interested in the sizzle than the writing, give it a try.

Find a copy on AMAZON
Posted by Katie O'Sullivan at 6:54 AM