Monday Book Review: The Trouble with Tigers, by Kimberly Keyes 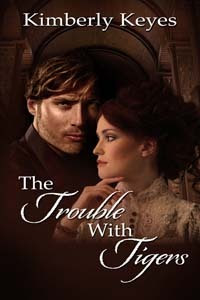 The Trouble with Tigers, by Kimberly Keyes
Published April 2016 by The Wild Rose Press


When Lord Zeke Thurgood, grandson to the Earl of Claybourne, returns to London following a trip abroad, he’s flummoxed by his grandfather’s new young servant, Kit. He’s not only woefully inadequate, he’s odd. Witness Kit’s penchant for staring at Zeke like a cat eyes a pot of fresh cream.

Lady Kitty Hastings had begun to think hiding as a boy servant would keep her safe from her guardian. Enter Lord Zeke Thurgood. Magnificent, maddening Zeke whose grousing unwittingly leads Kitty’s nemesis straight to her.

Zeke is still reeling over Kitty’s true identity when he lands in the role of her fake fiancé. Emphasis on fake. Zeke’s plans don’t include marriage, much less staying in England. Only after Kitty assures him he’s not the man for her does it dawn on him—Kitty’s irresistible mix of courage, determination and charm are exactly what he’s been missing. Now he’ll need to convince her they’re a perfect match, or lose the best thing that ever happened to him

Let me begin with the main point of the review:

The Trouble with Tigers is a thoroughly enjoyable Regency tale of intrigue, romance and suspense. I truly enjoyed every minute of this book, with all its twists and turns. Kudos to the author on a well-written, totally engaging book. I loved the mistaken identity, the slow-burn of the building relationship between Kitty and Zeke, and the despicable secondary characters that twist the plot and try to take advantage of Kitty while making her think it's her own fault she's in such situations. Zeke is a perfect hero -- flawed, broken and confused, but also protective, loyal and steadfast. His journey arc was wonderful to follow, and I think I'll be rereading this book again over the summer. It's that fun.

Now... let me grouse for a minute (or two) about the title.

Thing is, there aren't any actual "tigers" in this story, aside from Lady Kitty Hastings with her remarkably green and slanted cat eyes, and the fact that the hero recently returned from overseeing his mines in Africa (is there a tiger coming with him?) and brought a unique "tiger-eye" diamond with him. Yes, there are a lot of sly cat references throughout - but it still didn't quite explain the title.

Since Regency isn't my usual genre, I was confused and kept waiting for the tiger part to bring trouble. Then pretty early on, the hero (Lord Zeke Turgood, grandson to the Earl of Clayborne) calls his grandfather's new manservant a "tiger." For no apparent reason. And keeps referring to the servant as such. Except the boy - the "tiger" - is actually Lady Kitty posing as a boy to live undetected in the earl's household, for reasons that become apparent later in the story.

Which left me thinking, wtf?

It took me a bunch of googling to figure this puzzle out - again, I'm not a usual Regency reader, remember? Maybe some of you historical fans knew this right off the top of your heads, but I got totally hung up on it. I needed to know.

I learned that the term "tiger" refers to "a liveried groom, generally small, generally young. An owner-driven curricle or phaeton typically had a groom’s seat between the springs on which the tiger sat. The single-horse cabriolet had a platform at the rear on which the tiger stood. He also managed the horses when his master ascended to or descended from the seat, and sometimes took the reins to exercise the horses while his master temporarily left the vehicle. A small, lightweight tiger was preferred in order to maintain the proper balance. In fact, it was something of a status symbol to have the smallest possible tiger."

(Okay, I also had to look up "curricle" and "phaeton" but there were pictures to help me out, and context in the definition itself to let me know they are types of carriages. See? I'm not stupid. Just confused.)

It makes perfect sense for Lord Thurgood to assume his grandfather has employed the "boy" as his "tiger," especially if the status symbol part of it is for the boy to be young, small and delicate. Regency London was all about status symbols (so I also learned.)

I can't help thinking that the author should have somehow explained this to her readers, or put a definition on an intro-like page to help us out, unless she assumes only Regency fans would read her book to begin with. Which isn't at all necessary, because the rest of the storyline is absolutely wonderful, well-plotted and well-written and just all-around fun to read.

I just wish she'd explained the tiger thing better. Especially since it's in the title.

Now that we've cleared that up - and now that you can go into the story understanding the author's meaning of the word tiger - I totally recommend this book for a wonderfully engaging summer read. Seriously. Go grab a copy now on AMAZON and you'll be in for a fun ride.
Posted by Katie O'Sullivan at 6:00 AM