Monday Book Review: The Improbability of Love, by Hannah Rothschild 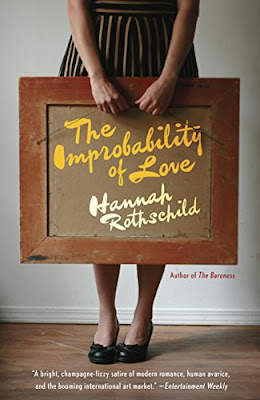 The Improbability of Love, by Hanna Rothschild
Published 2015 by Vintage Books, a division of Penguin Random House


Wickedly funny, this totally engaging, richly observed first novel by Hannah Rothschild is a tour de force. Its sweeping narrative and cast of wildly colorful characters takes you behind the scenes of a London auction house, into the secret operations of a powerful art dealer, to a flamboyant eighteenth-century-style dinner party, and into a modest living room in Berlin, among many other unexpected settings.

In The Improbability of Love we meet Annie McDee, thirty-one, who is working as a chef for two rather sinister art dealers. Recovering from the end of a long-term relationship, she is searching in a neglected secondhand shop for a birthday present for her unsuitable new lover. Hidden behind a rubber plant on top of a file cabinet, a grimy painting catches her eye. After spending her meager savings on the picture, Annie prepares an elaborate birthday dinner for two, only to be stood up.

The painting becomes hers, and as it turns out, Annie has stumbled across a lost masterpiece by one of the most important French painters of the eighteenth century. But who painted this masterpiece is not clear at first. Soon Annie finds herself pursued by interested parties who would do anything to possess her picture. For a gloomy, exiled Russian oligarch, an avaricious sheikha, a desperate auctioneer, and an unscrupulous dealer, among others, the painting embodies their greatest hopes and fears. In her search for the painting’s identity, Annie will unwittingly uncover some of the darkest secrets of European history—as well as the possibility of falling in love again.

Irreverent, witty, bittersweet, The Improbability of Love draws an unforgettable portrait of the London art scene, but it is also an exuberant and unexpected journey through life’s highs and lows and the complexities of love and loss.


My Take:
One of my New Year's resolutions was to read more literary fiction, adding it into the mix of romance and suspense, mystery and young adult. Literary Fiction is a different animal altogether, and one that is "allowed" to break certain norms and current rules that the rest of us are bound to follow.

Head hopping? No problem. Multiple (as in twenty or so) characters with completely different viewpoints and character arcs? Go for it. Entire chapters told in first person by the painting in question? Sure. Umm, what was that last one?

Yup. Entire backstory chapters told in first person by the sentient, 300-year old masterpiece the book is named for. A painting which has an obscenely high opinion of itself, I might add, as well as opinions about just about everything else. More than a neat device to add the history and texture to the storyline, the painting actually has the most interesting and complex personality of all the characters.

This was certainly an engaging and interesting read, once I got passed some of that quirkiness and rule-breaking. The writing was poetic and flowing and wordy, painting evocative pictures of every tiny detail, almost seeming just for the sake of wordiness but in a good, old-fashioned sort of way. When something modern was thrown in (the odd use of a modern expletive, for example) it shocked more than it does in say a New Adult book where every other sentence carries an f-bomb.

At it's heart, the novel is both a mystery that slowly unravels as well as a second-chance love story for the main character Annie. Once I grew accustomed to all the unusual stylistic choices the author made, I was hooked and finished the book on a cross-country plane ride last Friday. If you enjoy complicated, meandering but ultimately well-written and exquisitely worded prose, try this novel on for size.

Grab a Kindle copy on AMAZON... or borrow a copy from your local library. Like I said, it's probably not for everyone, but those who love it TRULY love it.
Posted by Katie O'Sullivan at 5:00 AM