Writing Wednesday: The Art of the Blurb

So I may or may not have mentioned this here, but I was asked to participate in an upcoming anthology coming out this spring, entitled Hunks to the Rescue. The first teaser image looks like this... 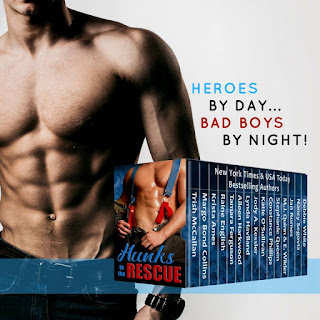 Yum, right? So I'm working on my story, BREAKING THE RULES, and it's almost finished, but the blurbs were due last week. Who here likes to write blurbs? Let's see a show of hands? Umm, that's no one, right? Right.

I thought I was doing pretty well and had a kind of query-letter-type blurb written:

...And then I find out that no, we can't write however much we want, there are guidelines. It's an anthology of 15 stories, remember, so we only get so much space. And we need to submit teasers too. So a 100 CHARACTER teaser, a 200 CHARACTER promo, and a 300 CHARACTER blurb. The blurb above? Over 900 characters...

In retrospect, it's probably a good thing to boil down the story to a few images. But the pain of stripping it down... ugh. So of course I enlisted a friend and we went back and forth via text, phone and email... we played with some ideas...

Undercover at a 5-star Cape Cod resort, Detective Jake Campbell can’t resist falling for a suspect. But is she willing to break her own rules to be with him?
(157 characters)

Undercover at a 5-star Cape Cod resort, Detective Jake Campbell can’t resist kissing one of the suspects. But will she ever trust him with her heart?
(149 characters)

The only female chef at a 5-star resort, Abigail Duncan knows a thing or two about pressure and rules. She has no idea her new cook is an undercover cop, but when people start dying, Abbie realizes Jake Campbell might be the only one who can keep her safe. Whether her heart is safe is another matter.
(300 characters)


Yeah, all close but not quite right. I must admit, it really helps to have another writer to bounce ideas back and forth with.  I liked the question aspect, and argued that it added a certain amount of anticipation to the teasers and promos. I mean, that first one - "can't help falling for a suspect..." ho hum who cares? And my friend kept arguing to keep Cape Cod in the sentence because it give sense of place, but then again, it's 8 characters... and whether to lead with Jake (since the anthology IS Hunks to the rescue) or make sure to get Abbie's name in there (strong, spunky heroine) was a big debate, especially after my friend spent all weekend at the Women's March in Boston.

But I needed to have it submitted by January 23rd. So we needed to come to an agreement. Here's what we finally came up with:


Undercover at a 5-star resort, can rule-breaker Jake Campbell resist falling for a suspect?


While undercover at a 5-star Cape Cod resort, Detective Jake Campbell can’t resist the fiery red-headed suspect. With a body count rising around her, can Abbie Duncan trust him with her heart?

I think we nailed it. What do you think? Be honest - even though it's too late this time around, it's all a learning experience. And there's always the next book blurb to write... 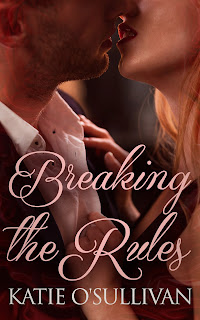 Posted by Katie O'Sullivan at 3:55 PM