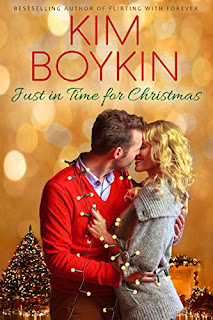 About the Book:
Book 4 of the Lowcountry Lovers series

Nobody does Christmas like Miranda Hamilton, and now that she finally has her chance to chair Magnolia Bay's tree lighting and the cotillion, which benefits her late mother’s breast cancer foundation, this Christmas is shaping up to be the best ever. That is until her childhood nemesis Logan Mauldin buys his way on her committee and starts making plans of his own.

Logan Mauldin loves to get under Miranda's very sexy skin, and it's only fair. She's been getting under his since long before their first kiss at 13. Logan’s the last man interested in co-chairing a Christmas committee or participating in a sexy bachelor auction, but since that night he interrupted Miranda on a date and cornered her under the mistletoe, he can't stop thinking about her. Or vying for her attention and bugging the hell out of her.

Christmas cheer isn’t the only thing that heats up between the Miranda and Logan, but, thanks to a lie that is as much her fault as it is his, he loses the woman he’s loved since forever. Logan will need a Christmas miracle for Miranda to forgive him. A grand gesture to melt her heart and win her back just in time for Christmas.


The Lowcountry Lovers series
Book 1: Flirting with Forever
Book 2: She's the One
Book 3: Sweet Home Carolina
Book 4: Just in Time for Christmas
Book 5: Caught Up in You

I've been reading quite a few Southern romances lately for some reason. My parents retired to Savannah, and mom and I discovered Mary Kay Andrews soon after. I totally have a soft spot for a well mannered Southern gentleman, and the Southern ladies who can speak softly but still make everyone tow the line. I'm not a fan of damsels in distress or Southern belles, per se, but like books by authors who understand the grit of Southern women and their relationships.

I've only read this one book in the series by Kim Boykin, a Christmas gift from a friend, and I can't decide if I'm going back for more or not. But this sweet Christmas romance is set in a Southern coastal town, and features the kind of quirky characters I enjoy and the small town sensibilities important to this particular genre.

Miranda Hamilton has lived in Magnolia Bay her whole life, and now runs the B&B she inherited from her (now deceased) parents. She's a type A perfectionist, striving to have it all while hanging out with a quirky circle of feisty females and also wishing she had some special guy to share it with.

Logan Mauldin also grew up in the small town, alternately flirting and fighting with Miranda over the years. He's all grown up now, and knows that Miranda is the one he wants to spend the rest of his Christmases with, but now he needs to convince her there's no one else but her. Can he convince her of his love in time for Christmas?

As an avid reader of second chance/ last chance/ friends-to-lovers romance, I appreciate the plot, but felt the author had to work extra hard to keep her couple from falling all the way earlier in the book. Which tells me there just wasn't enough reason for them to stay apart, or at least not enough reasons that were articulated to the reader. The he said/ she said alternating viewpoints worked well, but Miranda worked a little too hard at finding excuses not to fall in love. The thing I liked best? The Southern Low-Country flair. Loved it!

If you like sweet romance with a slow-burn Southern flair, try this Christmas story. Yeah, I know spring is just around the corner, but there's always time for one more Christmas story, right?


Grab a copy on Amazon.
Posted by Katie O'Sullivan at 5:00 AM