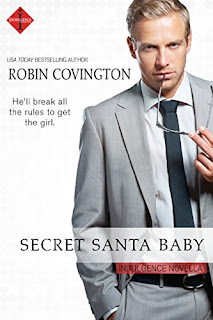 
Tessa Stoneman hasn't been able to get long-time friend and business partner Nicholas Boone out of her head since they shared a single kiss in college. Even when she dated Nicholas's best friend. Now that she's giving up her position at GameNerdz to strike out on her own--and now that she's single--maybe it's the right time to see if there's still something between them.

Nicholas knows once Tessa leaves the company she helped found, they might drift apart. Before she starts her own company in the new year, he wants to woo the woman he fell in love with during college. So he poses as her Secret Santa, gifts her with items from the song "Santa Baby," and plans a big reveal at the company holiday party. But when his best friend wants to rekindle his romance with Tessa, will Nicholas lose his last chance?

This is an older book, but my Christmas romance obsession is rather new, so I'd never found this one before. A novella length story, it's a quick, sweet, satisfying read with main characters who've been dancing around their mutual attraction for too many years.

Three close college friends founded a successful tech company, but when it came down to dating, Tessa ended up with the bolder of the two men, not the quieter one she secretly dreamed about. Now that she's about to leave the company to strike out on her own, Nick knows it may be his last chance to let her know he's been harboring a secret crush since college, held back by the "bro code" that says he can't date the ex of his best friend. Even if he kissed her first.

As I said, this is short and sweet, and maybe a little rushed given the restrictions of the short page length, but satisfying nonetheless. If you're looking for a quick read to refresh you after a frazzled day at work or a harried trip to the mall, try this out. Robin Covington has a list of great reads to her name, and this short taste of her abilities is worth it. Think of it like a Hallmark channel Christmas movie... don't think about it too deeply, just go along for the ride and smile.

Grab a copy on AMAZON where it's free right now.