For today's Writing Wednesday, I'm excited to have author Kay Harris as my guest, here to talk about her new release and how she got to this point with her writing. She's new to The Wild Rose Press but not new to writing, and has self-published five previous titles. 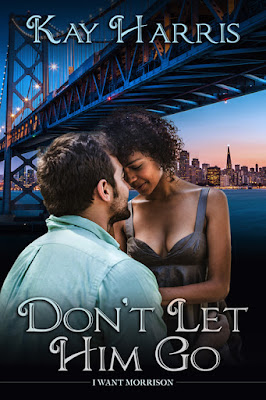 My sixth contemporary romance novel “Don’t Let Him Go” will be the first one to be published (as opposed to self-published). It released on February 14 (how perfect for a romance, right?) The journey to having this multicultural romantic comedy published by The Wild Rose Press is an extraordinary one (at least, I think so.)

Three years ago I was living in the Bay Area. I lived on the island of Alameda in the East Bay and worked in downtown San Francisco. Each morning I took the ferry across the bay, under the Bay Bridge and to the historic ferry building (always sipping on fancy coffee.) Each evening I took the ferry back home (sometimes sipping on red wine from the bar in the back of the boat.) It was a fantastic commute for sure, but it was also the beginning of this story.

“Don’t Let Him Go” is the tale of a conservative-minded corporate lawyer who finds herself stuck working with a bleeding-heart activist. Like the cities that lie on either side of the Bay where this story is set, the couple is multi-faceted. One is straight-laced and well-put-together but with a strong sense of right and wrong held deep inside. The other is raw, exposed, and far more comfortable in his own skin. The bridge stretching between them is the connection they unexpectedly find. And like the Bay Bridge that connects San Francisco to Oakland it is regal, proud, and often overlooked in favor of the shiny red bridge that runs north to south.

Okay, so I’m getting dramatic. But I love this story and I love these characters. They spoke to me each day as I rode that ferry and after I returned home each night I wrote it all out. Last April I was preparing to self-publish “Don’t Let Him Go” as I’d done with five other books before it, when I attended the Las Vegas Writers’ Conference. It was there that I met the amazing ladies of The Wild Rose Press and a new future, a new dream for my characters was born.

So now here I am, releasing my baby into the world. I hope you all will love it as much as I do!

Excerpt:
I folded my arms across my chest and glared at Jack as he moseyed into the room. “You ambushed me.”

Jack came to a stop a few feet away and nodded. “I did.”

“That’s it?” I spread my arms out and leaned forward. My voice rose despite my effort to control it. “That’s all you have to say?”

“What do you want me to say? You’re smart. You can see what I did back there. I used you for my own gain.”

“I’m not surprised you feel that way. But I am sorry you had to get caught in the crossfire.” He moved to the couch and took a seat in the middle of it, purposefully giving me the high ground.
He slung his arms over the back of the couch casually, making him look like an arrogant ass. And that is exactly what I thought of him at that moment. So I called him on his supposed apology. “Are you?”

“Yes, I am. But you’re not innocent, Candie. You put yourself in this position by going to work for Morrison.”

“It’s Candace!” I shouted, on the edge of insanity.

He didn’t respond. He just looked at me with that infuriatingly handsome face and waited, an amused grin dancing on his face.
~ * ~ * ~ * ~

Kay Harris has had a diverse career with jobs ranging from college professor to park ranger. Now she adds author to her repertoire. Kay writes romance novels that contain a little bit of sweet, a dash of sexy, a touch of heartbreak, and a whole lot of fun!

Kay grew up in the Midwest and has since lived all over the western United States including Montana, Wyoming, Utah, Arizona, Nevada, and California. She loves to hike, is obsessed with museums, and enjoys taking her extremely tall and very handsome husband on adventures.