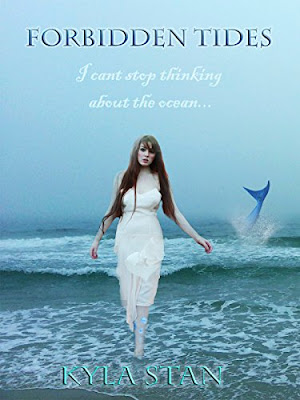 
Some would say I look like a mermaid, the essence of nautical beauty. I looked in the mirror and saw a monster....

Astrid Murphy, born with strange webbed hands and a thirst for saltwater, feels like a freak. She desires to look and feel normal, just like her family. But Astrid doesn’t realize that she’s meant to be the next ruler of the Deep Clan, a race of merfolk who are dying from pollution and overhunting. She is the only one who can save them.

Zander’s mission was to find Astrid and bring her home. Not fall in love with his target. Surrounded in a web of danger, a forbidden love between clan daughter and warrior blossoms. Zander knows they can’t focus on each other, and the Deep Clan must come first.

But it’s the one enemy Astrid never expected who will tear it all down. Her father. The one person who was supposed to love and protect her, will do anything to keep her from fulfilling her destiny with Zander. Even kill.

We all know how much I like mermaids. And yet, I don't read a lot of mermaid novels. I haven't wanted them to "color" the way I write my own mermaid world. But now that I find my own undersea kingdoms pretty well established (and nearing a close, once book 4 is finished) I'm branching out and dipping a toe into other mermaid worlds and novels. Even though it would seem that "mermaid" is a universal character, there's much that's not canon about life beneath the waves, and it leaves so much to the individual author's imagination that each mermaid story ends up with unique twists and explanations for how mermaids survive, speak to one another, and travel on dry land (if they can.)

Kyla Stan has created one such unique world. FORBIDDEN TIDES is an engaging mermaid fantasy, where the myths of Selkies and Mermaids are twisted together and set on the California coast. Danger, greed, suspense and light romance weave together with a strong environmental message to create an interesting tale.

My youngest son was in a summer stock performance of SELKIE a few summers ago. Set in Ireland, the play begins with the father figure tricking a young selkie woman into marriage when she was in human form at the full moon. Their half-breed child, a girl, was born with webbed feet and hands, and a love for the ocean, like it was calling to her. The father becomes evil and greedy, killing as many seals as he can to sell the pelts, even though he knows in his heart that they are selkies, like his beloved wife. He routinely slices the webbing between his daughter's fingers to keep her from being bullied in their small village.

In so many ways, this book reminded me of that play.

Astrid is obviously a half breed, although she doesn't know it and it's unclear for most of the book whether her mother is a mermaid or not. (She does seem to know an awful lot.) Astrid's father is the greedy monster who gets rich by catching and killing mermaids to sell for their "pelts" and as specialty food. He also routinely cuts the webbing from between Astrid's fingers. He doesn't want her to ever know of her close connection to the ocean or to the underwater creatures he now hunts.

Zander is the merman given the mission to find Astrid and bring her back to the clan before they die off from over-hunting and pollution. He doesn't expect to fall in love with her, or to end up spending time on dry land with her and her human family. He certainly doesn't expect her to love him back.

And it gets more complicated from there.

The book is an odd mix of light ocean imagery and banter, and soul-wrenching darkness. Told in alternating points of view between Zander and Astrid, the book also has a disturbing amount of head hopping and omniscient narrator going on. The author also describes a few merfolk feeding frenzies that makes the race sound downright scary. Even scarier are Astrid's father and the other fishermen, bloodthirsty and driven by greed, as well as the directors at the local aquarium, who decide it's easier to study the mer-creatures when they're dead. Rather than embrace this new race and try to learn about them, everyone acts like they're fish. Animals. Less than.

I'm not exactly sure who the target audience is for this story, as there are aspects that are far, far darker than my own mermaid stories, and yet other parts that are too light and playful for adult readers, with not enough sexual tension to interest New Adult readers. I guess this is for mermaid lovers only, and it's really an interesting look at one author's mermaid vision and world.

If you love mermaid stories, grab your copy on AMAZON now.