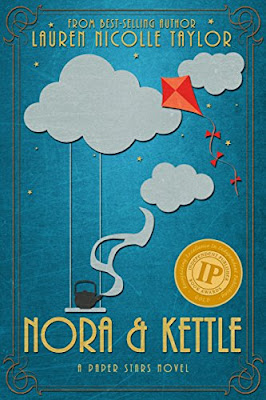 After World War II, orphaned Kettle faces prejudice as a Japanese American but manages to scrape by and care for his makeshift family of homeless children. When he crosses paths with the privileged but traumatized Nora, both of their lives are forever changed...

Lauren Nicolle Taylor’s Nora & Kettle is a heart-wrenching historical fiction novel that will appeal to fans of books by John Green and Ned Vizzini, novels such as The Perks of Being a Wallflower, The Beginning of Everything, Eleanor & Park, The Book Thief, and classics like The Great Gatsby and The Catcher in the Rye.

Thoroughly engaging and heart wrenching in both subject and the sheer beauty of the imagery the author creates out of utter darkness, Nora and Kettle is a different kind of story but one that's totally appropriate for the times we live in. Although the characters are young enough to be YA, I hesitate to classify this book in that category, and might call it literary fiction instead, the way The Book Thief was more literary fiction than YA. There is a kinship and echoes to classic Peter Pan stories but don't be fooled. This is in no way a Disney tale.

Set in post WWII America, the author tells the story from two disparate points of view, with two unreliable first person narrators. It's essentially two stories taking place in a side by side manner until the stories converge. Each narrator reveals their true story crumb by crumb until the full picture emerges of how desperate both of their situations have become.

If you want the experience of having it unfold at its own pace, surprises and harsh reality and all, then stop reading my review and just go buy the book.  If you want to know a little more about what you're getting into, keep reading.

Nora is a wealthy teen living in a post-war 1940s American city. They never say whether its New York, Philadelphia, Chicago... But it's a city of that size and feel.  Her father is an important lawyer, but a cruel man. He may fight for civil rights all day, but he beats his wife and daughters behind closed doors. His current case is fighting for the rights of the Japanese Americans who were imprisoned in camps for the duration of the war.

Kettle is one of those Japanese American "Lost Boys" whose parents died in the camp, and have been taken cross country for resettlement. He and a friend escaped from the system and now live in abandoned subway tunnels, working on the docks doing dangerous jobs alongside racist roughnecks. Along the way they've collected an assortment of other runaway children whom they care, an unlikely family of kids no one wants living off the radar.

The implications and comparisons to today's immigrant crisis with families being torn apart seems so timely. Especially when Rachel Maddow draws parallels between the Japanese internment camps and today's border arrests. Showing the struggles and the humanity of the Lost Boys will make you ache for the current generation of kids going through similar trials. But there's also the contrast between the poor but free orphans, to the rich but trapped Nora who lives in luxury but is beaten on a daily basis by her parent.

Lyrical and heartbreaking, this is a great read and I totally recommend it.

Grab a copy today on AMAZON
(as of my writing this the Kindle version was free)
Posted by Katie O'Sullivan at 6:00 AM