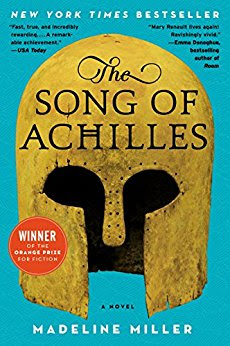 Song of Achilles, by Madeline Miller
Published 2012 by Ecco, an imprint of Harper Collins

A tale of gods, kings, immortal fame, and the human heart, The Song of Achilles is a dazzling literary feat that brilliantly reimagines Homer’s enduring masterwork, The Iliad. An action-packed adventure, an epic love story, a marvelously conceived and executed page-turner, Miller’s monumental debut novel has already earned resounding acclaim from some of contemporary fiction’s brightest lights—and fans of Mary Renault, Bernard Cornwell, Steven Pressfield, and Colleen McCullough’s Masters of Rome series will delight in this unforgettable journey back to ancient Greece in the Age of Heroes.

Song of Achilles is a powerful, moving love story. A retelling of the classic Greek myth of Achilles and the Trojan War, but told from the point of view of Patrocles. In this telling, Patrocles is not Achilles' cousin but his chosen companion as a boy, and then his lover as they grow older.

Their story is touched on briefly in the middle books of the Iliad, but Greek philosophers expended much time and countless letters debating their relationship. The author seems to have done extensive research before weaving this wonderfully rich tale filled with passion, emotion, and adventure.

The relationship is complicated in so many ways, not the least of which is the fact that Achilles mother is an immortal who has great plans for her only child, plans that don't include happiness for her demigod son.  She wants Achilles to take his place with the gods, and sees Patrocles as an obstacle to his fame, because while boys might play at love with each other, grown men may not. But no one is playing, the emotions are deep and real, bleeding off the page is the most engaging way.

The writing is both modern and lyrical, making mythology seem both ordinary and fantastic at the same time. The author's style makes the story accessible to the modern reader, but if your only exposure to the Achilles/Patrocles relationship is the Brad Pitt version from 2004, you will need to readjust your expectations.

This is not a fluffy, fast book, but I totally recommend throwing this into your beach bag for a totally engrossing beach read. You won't be sorry.

*Note that the Kindle version is $8.99, and the paperback is less than $14 - you may want to order the actual book, and pass it on to a friend when you're finished. Share the love! And actually, that's how I received my copy, from my father's wife. Because my son wouldn't lend me his copy. Strangely enough, both of them totally loved the book. Its appeal may not be universal, but it certainly crosses genders, ages, and political affiliations... just sayin'...