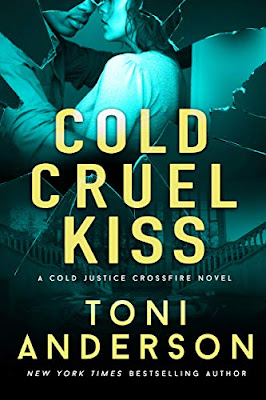 When the daughter of the US Ambassador to Argentina is kidnapped in broad daylight on Christmas Eve, the FBI sends one of its best negotiators to investigate.

Supervisory Special Agent Max Hawthorne arrives at an embassy thrown into chaos as US and local law enforcement hustle to track the young woman. Is this a simple kidnap for ransom, or part of a political agenda? Could it be something more sinister?

Lucy Aston has something to hide. Preferring to stay in the shadows, the lowly, fashion-challenged office assistant resents being assigned to help Max. But Max can’t resist a puzzle…he’s starting to suspect Lucy Aston is not what she seems.

When rumors emerge of a suspected Russian spy operating out of the embassy, Lucy’s carefully constructed life begins to crumble. As she and Max race to rescue the ambassador’s daughter, Lucy has to do whatever it takes to keep her cover from being blown—even if that means betraying the man she’s falling for.

Toni Anderson has done it again! Another brilliant home run of a romantic suspense novel in the fascinating series, which itself is a spinoff of her previous awesome series. The best part with all of these stories? They're all stand-alone books, each and every one. You can try any one - or read them all. The intertwined characters add a depth to reader enjoyment, but the lack of knowledge has few consequences because Anderson is a master of focusing on the story at hand, and dragging the reader along for the wild ride.

Cold Cruel Kiss released last week, and is technically Book 4 of her Cold Justice-Crossfire series, each focused on a member of the FBI's hostage negotiating team. Like the previous books, we've met the FBI negogitator before in a secondary role but haven't yet encountered the love interest. In this story, the hostage negotiator is Max Hawthorne, a British ex-pat and former soldier who happened to be on Christmas holiday in South America with a few of his old British special forces buddies when the kidnapping occurred in Argentina. The 17-year old daughter of the U.S. ambassador was taken off the streets, and the motives are unclear - is it politics or greed at work? Or some mix of both?

Anderson sets her usual fast pace, and the reader can almost feel the clock ticking down. Chapters are narrated in third person from varying points of view, including both main characters and both kidnapped girls as their situation becomes more desperate. The identities and true motives of the kidnappers are kept secret to the very end - at least, I had no clue who was behind it all. Masterful storytelling that keeps you on the edge of your seat and guessing what's around each corner.

If you haven't read a Toni Anderson novel, you're in luck because between the two series, there are now 14 of these FBI romantic suspense novels already available to binge on. Strap yourself in for a wild ride!

Grab a copy of COLD CRUEL KISS now on Amazon