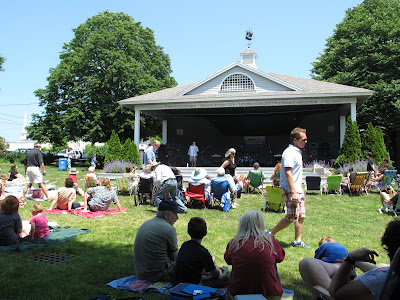 I may have mentioned before (once or twice) that my kids are in rock bands. There's a great studio in Hyannis called Mode4Music where they not only take regular guitar lessons, but also "rock band class" - my son has been in the same band for 4 years now, and he's just 13.

Over Father's Day weekend, the studio took over the stage at the Hyannis Green, and put on a free concert on a sunny Saturday afternoon. My daughter's band, Blonde Persuasion, performed two songs in the first set and my son's band, NonCompliant played four songs in the second set and dominated the show (okay, I know I'm the mom but really, they did!) 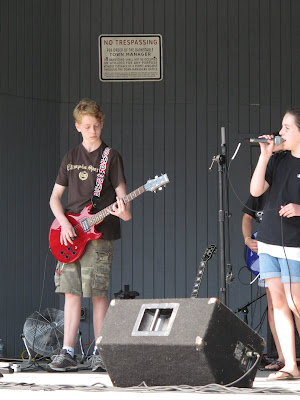 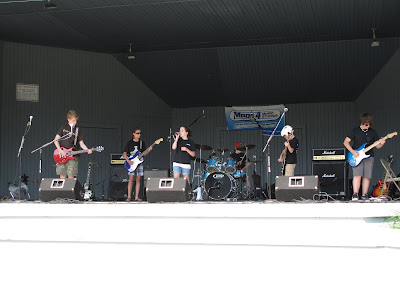 It was great to see so many kids on stage performing in groups or doing their solo thing. Kind of like a live American Idol thing but much more real. NonCompliant had a few technical difficulties with my favorite Lifehouse song, All In, but they worked through it like the seasoned pros that they already are, not missing a beat.

Afterward, we went out with my parents for a lobster dinner - first lobsters of the season! - and toasted both Father's Day and my talented kids for a great performance.

If you missed this show, you still have another chance to catch NonCompliant this summer when they play at the annual Barnstable Kids Day, sponsored by the police and fire departments. I blogged about last year's event which you can read by clicking here.

Did you do anything special for Father's Day weekend?
Posted by Katie O'Sullivan at 7:01 AM