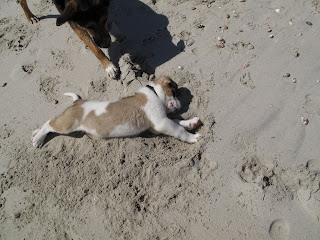 
When Puppy was still a little thing, she decided she really liked to dig in the sand. We hadn't had her long before the weather was warm enough (and she was strong enough) to walk up to the beach. She was kidn of afraid of the waves and wary of the sand as well, but soon decided the sand was safe enough.

She developed a cute habit whenever we went to the beach - she'd throw herself down and stretch her body as far as she could, and then dig with her front legs into the soft sand. The front legs would move together, in tandem, throwing sand down toward her belly and rear legs. We'd never had a dog "dig" quite like this, and it was adorable to watch her in action... 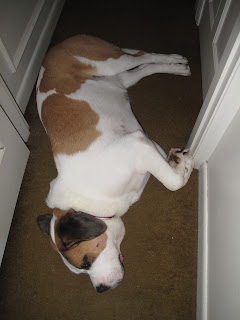 Puppy in the hallway, September 2011

These days, the Puppy would rather spend her beach time running and playing in the water. The only time she lies down is when she tries to "hide" in the ocean, with just her head jutting above the water line.

But she still digs in her dreams.

She still lies on her side and moves her legs in that odd tandem motion - even though now she 's doing it while lying on the hall rug, or (mostly) on the linoleum kitchen floor.

It's not about throwing the sand around, evidently. It's about that freedom of motion... 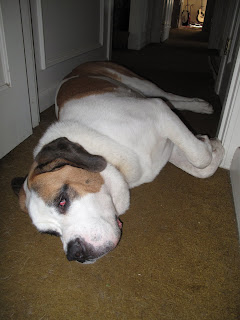 ...except that she's getting a little too big to move too freely. She just doesn't fit in her favorite spots as well as she used to.

She's still adorable to watch, though!
Posted by Katie O'Sullivan at 1:14 PM