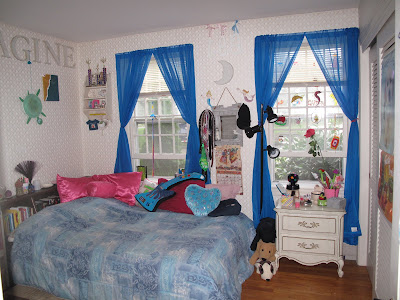 Blogging isn't *gasp* the most important thing in my life.

I have three kids. They have to outrank anything on the computer, as they are related to me and my poor Dell, although I love it dearly, is not.

Right now all three are intent on rearranging each of their rooms and, in conjunction or by extension, most of the entire household. Which is fine in and of itself. Except for all the dust and dirt and tumbleweeds and dead spiders that keep turning up every time we move a piece of furniture or try to clean out a closet.

This is what I get for spending too much time at the computer in the last year, and not enough on that other job... what's it called again? ... oh yeah, housekeeping. As in, my own house.

Oh well, a little dust is not the end of the world after all. But once you've got the furniture moved, it's hard to turn a blind eye to the rolling tumbleweeds. Or the ones stuck to the walls behind said moved furniture that are no longer hidden...

On the bright side, doesn't my daughter's "new" room look great? All stuff we had in the house already, completely rearranged. The word on the left wall that's partially visible is "IMAGINE." It used to be surrounded with mermaids that we'd collected over the years. Now only her sea turtle project remains.

I wonder what she's going to start imagining next.

Hopefully not about rearranging more furniture.

What are you up to this week?
Posted by Katie O'Sullivan at 11:46 AM