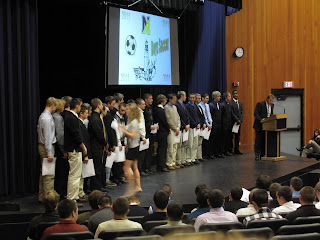 You know it's really and truly Winter when the Fall sports finally have their Awards Night... okay, maybe this only works with parents of high school athletes, but it was great to finally put a big punctuation mark at the end of the Soccer Season.

My son joined the rest of the Varsity team on stage as their proud coach handed out letters and awards to everyone who played on the Varsity team, whether they had enough game time or not. He said the team performed as a Team and everyone deserved to be honored. Five of the starters were nominated to the All-League team, and one to the All-State team. They had a great season, ending as League champions with an overall record of 17-4, losing in the State Division 1 Semi-Finals to BC High. Not bad for a little team from Cape Cod.

Now we're on to Basketball, with the first game of the season scheduled for next week, and the second game slated for the day before Christmas break.

Definitely Winter.
Posted by Katie O'Sullivan at 5:56 AM

Email ThisBlogThis!Share to TwitterShare to FacebookShare to Pinterest
Labels: Christmas