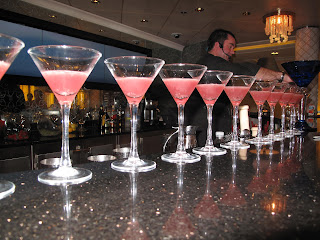 I was lying in bed this morning, planning what I would write here for today. I had it all planned out, clever title and all. But when I got to my computer I'd completely forgotten about an article I needed to finish for deadline.

Of course, now (many hours later) I can't remember anything I was planning to write for my blog, not even the title.

Isn't that the way life goes sometimes? You get a great idea - one that gives you tingles on the back of your arm, even - and then something interrupts and the idea dissolves, getting wispier and wispier until it's gone.

Martinis and Big Ideas go together a lot of the time for me... although I have to admit that some of those ideas aren't nearly as big as they seemed before the glass was empty...

What do you do to hold onto you Big Ideas? Do you write them down right away, jotting them into notepads or onto cocktail napkins as the case may be? Or are you one of the lucky people that remember all your ideas? Even when you're drinking martinis?

Okay, as for swapping spit - I read a blog post yesterday that I can't get out of my head. This author was describing her series of books, and the fact that her heroine dates more than one guy in the course of the series. It's YA, she's 15, none of the "dating" goes further than a few kisses, but some of her fans/critics call the heroine a skank because of her fickle heart.

The author called this the "Twilight Effect," blaming Bella and Edward for the one-to-one monogamy "demanded" by YA readers.

I disagreed. I pointed out that Nancy Drew only ever dated Ned Nickerson. Ever. For how many books? Another commenter pointed to fairy tales, and the "one true prince" trope...

What are your thought for YA? Can our heroines date? Or just have a one-and-only?