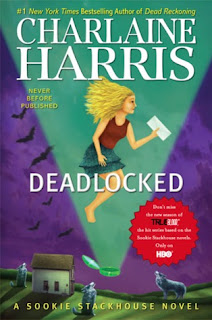 If you've read my blog for a while, you know I love this series.


But I just spent a few minutes reading some of the over 1,300 reviews and 21,000 comments already posted on Goodreads about this particular installment in the Sookie Stackhouse series, and, well, Ms. Harris can't be happy.

I admit that I'd already read the poor Publisher's Weekly review last week, before I bought it. But I still bought it, paying full price for the nook version from B&N.com. My Mother's Day gift to me. I started it Friday night and finished it Saturday morning. And it was entertaining.

I'm not into spoilers, and not into giving bad reviews.  And I enjoyed the book, even if so many on Goodreads definitely hated it. Many reviewers said the series was dying a slow and painful death, and one went as far to say it had turned from a sexy vampire to a zombie meandering aimlessly. (But wait, doesn't that reviewer know that Zombies are the new Vampire? Aren't they?)

If you haven't read the first 11 books in the series, don't start here. Go read the first book or two and see if you like them. They're all at your local library as well as on Kindle, Nook, and the shelves of many bookstores. Starting with book #12 is like trying to watch the last five minutes of a movie and only knowing it's "something to do with vampires." Don't do it.

If you are a fan of the series already (like me) I will say that it's not nearly as bad as the reviews make it out to be. It does average 3.5 stars. I'd probably give it 2 or 3, just for holding my attention. But there's nothing net new here. And there's no sexy scenes - Sookie has sex once with Eric, behind closed doors, as they say. And there's way too much about Claude, a character I haven't liked or trusted since I first met him.

Somehow everyone else in the world knew that this was the penultimate book in the series, and that it will be ending with #13. Shame on me for not knowing that before PW told me. But after reading it, I think it was a defense mechanism from the author or publisher, as if to let people know that all these seemingly random strings Ms. Harris has been playing with and loosely weaving only have another 600 pages or so to be wrapped up neatly.

That's a bit of pressure right there. And as a long-time fan of the series, I do appreciate that she's tying up the loose ends and neatly cutting others off. Which only leaves the still-dangling storylines that are hanging in the wind to be tied up in Book #13. Many reviewer think they know what the ending will be. And maybe they do, if Ms. Harris goes the predictable route. She is telegraphing rather loudly, as Sookie would say.

But maybe she'll surprise us all.

I guess I'll be reading Bk #13 when it comes out.  But I'll probably wait for it to be at the library.
Posted by Katie O'Sullivan at 5:00 AM