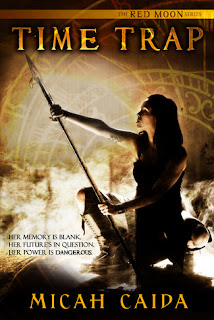 Time Trap, book one in the Red Moon series

Her memory is blank.
Her future's in question.
Her power is dangerous.

Waking up in an unknown world, Rayen learns only that she's seventeen and is hunted by a sentient beast. Terrified that she may never learn who she really is or find her way back to her home, she's captured in a land that is at times familiar even if the people and the structures seem alien. When local law enforcement delivers her to a private school, she's labeled as a Native American runaway, and Rayen discovers a secret with deadly repercussions.

Forced into an unlikely alliance with a computer savvy street punk and a gifted oddball girl to save their world - and the future - Rayen finds the key to an identity that no person would want.

What a fun, fast-paced read!

Okay, the blurb isn’t the greatest. If I had read that first, I’m not sure I would’ve tried this book, but I saw it recommended somewhere else and decided to take a chance. And the Kindle version was free for the day on Amazon. Who am I to pass up a free read? Right?

I’m so very glad I took the chance – this was a really fun book! I look forward to reading more in this series and can’t wait to see what happens next. And will totally pay for the next book in the series. And probably the one after that as well.

Most of the story is from Rayen’s point of view. As the main character she is perfect to introduce us to the new worlds, as she wakes up with her memory completely wiped. She experiences and describes everything as if it is new – which it is, both to her and to the reader. Only after the other characters have been thoroughly vetted by Rayen do we get a few chapters from their points of view, which adds to the richness of the story an the complexity of the plot. I enjoyed the insight into Tony’s and Gabby’s minds, as well as the confusion we hear from hunky Callan as he fights his attraction to Rayen.

Even with over 300 pages, the book was over far too quickly. As I said, I look forward to the next installment and can’t wait to see what happens next!

Micah Caida is the melding of two voices, two personalities and two minds - one NYT bestseller and one Award-winner - which often turns up the strangest ideas. Micah enjoys exploring how different characters react and deal with similar situations. Life is often filled with the unexpected - both good and bad. While creating the Red Moon series, Micah hit upon a very unusual "what if" that exploded into an epic story filled with teenagers who face impossible odds, but are the only ones who can save the world from itself.
For more information, visit http://www.MicahCaida.com or Micah Caida on Facebook