#New Release: Cooking Up a Storm by Ashley Ladd 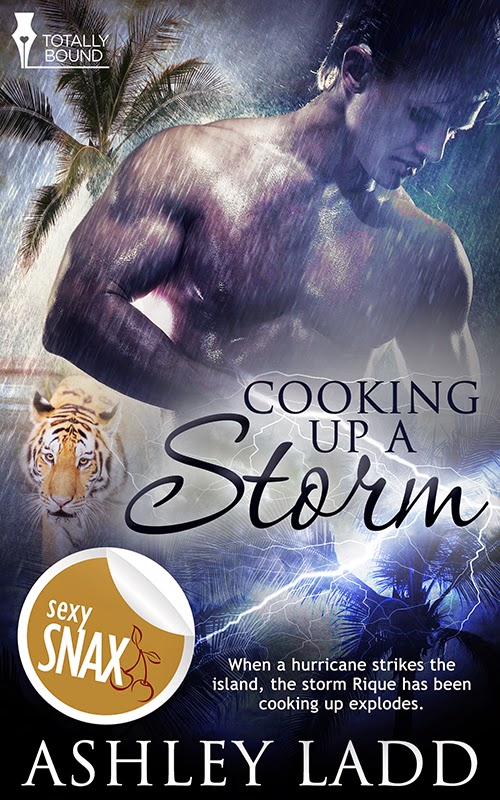 COOKING UP A STORM by Ashley Ladd
Available at Totally Bound: https://www.totallybound.com/cooking-up-a-storm
About the Book:

Brooks and Rique desperately want to win the head chef’s position offered by an eccentric millionaire Jonah Verleun on his beautiful, private but peculiar island that includes a zoo full of exotic animals, an amusement park and a monster shark tank beneath Jonah’s bedroom floor. While Brooks wants the job to escape his heartache and the lover who thwarted him, Rique is hiding from the mob, hoping to live long enough to pay them off with the prize winnings. Fierce competitors, they cook up a storm in a series of cooking challenges while trying to turn down the heat on their intense attraction. When a hurricane strikes the island, the storm Rique has been cooking up explodes, and no heart—or body—is safe.

Content Warning: This book contains mature and explicit content, including M/M and multiple partners, with a Sizzling heat rating from the publisher.

They ran, hunched over, zigging and zagging as bullets flew around them. Rique damned himself for putting Brooks in this mess. He wondered if the mob held the others prisoner and that’s why they didn’t answer the door.

He turned the first corner they came upon and then the next. He stopped dead and the air left his lungs. A moment later Brooks ran into his back almost knocking him over. He swayed dangerously but managed to stay upright and spread his arms wide to keep Brooks from stumbling forward.

He couldn’t believe his eyes. One of Jonah’s tigers lay in their path crouching low, baring his teeth, and eying them as if they were dinner.

He tried to quell the jitters attacking his stomach so the animal wouldn’t smell his fear then whispered to Brooks through clenched teeth, “What do we do now? Freeze or run?”

“Run. But where?” Brooks whispered back, a frown trembling on his lips.

“To the closest protection.” He prayed their hunters had lost them, that they wouldn’t run back into a barrage of bullets. As Rique bunched his muscles to run, already feeling the animal’s fangs ripping into him, he noted how the tiger’s thick muscles corded in his shoulders, and how saliva ran down his snarling lips.

“Dear God, we’re going to die.” Panic laced Brooks’ voice. “If we get out of here alive, let’s both turn down the job and move in together.”

Swallowing hard, Rique couldn’t reply so he nodded. Besides, as much as he wanted to live with Brooks, he couldn’t do it as long as he was indebted to the mob. However, the point was moot. He couldn’t see a scenario in which one of them didn’t die in the next five minutes.

Feeling responsible, Rique couldn’t let anything happen to Brooks as long as he was alive. He would take on the tiger giving Brooks time to reach safety. “On the count of three, run!”

As Rique whispered, “One,” hisses, then a blood-curdling growl wrenched the air. It was a different sound than the tiger was making. Then a crocodile bellowed and jumped out of the bushes and snatched the tiger by its belly. As it dragged the struggling creature back to the bushes, the tiger howled in surprise and pain. It clawed the air in vain as the reptile’s powerful jaws clamped tighter biting through flesh and bone.
~ * ~ * ~ * ~
Available at Totally Bound: https://www.totallybound.com/cooking-up-a-storm

Ashley Ladd lives in South Florida with her husband, five children, and beloved pets. She loves the water, animals (especially cats), and playing on the computer.

She's been told she has a wicked sense of humour and often incorporates humour and adventure into her books. She also adores very spicy romance, which she weaves into her stories.
You can find Ashley at: