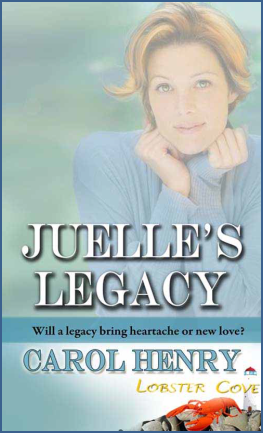 After an accident puts Juelle McClintock’s husband, Sebastian, in a coma, she’s left to care for her small daughter on her own—and to deal with the guilt over her plan to divorce him. When Juelle is faced with the decision of whether to remove his life support, her grief-stricken mother-in-law calls her a murderer. Matters become more complicated when Hunter McClintock arrives in town, claiming to be Sebastian’s half-brother.

Hunter McClintock is summoned from Hawaii for the reading of his father’s will—a father he never knew. Despite his qualms of dredging up bitter emotions, he goes to Lobster Cove, Maine, and walks head-first into a hornet’s nest, and a beautiful, sexy, grieving widow who is married to his half-brother.

An unexpected stipulation is revealed at the reading of the Will, and Hunter and Juelle are faced with decisions that will alter their destinies. Will Juelle’s legacy complicate her life further, or lead to the contentment and love she deserves?

Juelle had all she could do to hold back her own tears. Could she do it? Could she tell the doctors to let her husband go? And if she did, would it be murder, as Eugenia accused? She lowered her head and shut her eyes before her tears could fall. She fisted her hands, and took several deep breaths, swallowed. God, she was tired of holding it all in. She swung away from the scene in front of her, and headed for the door, only to be brought up short by a man standing there as if he’d been gob-struck. The man she’d seen at Mariner’s the night before blocked her exit. Before she could ask why he was here, Eugenia’s gasp drew her attention back to her mother-in-law.

Clasping the back of a chair, the woman looked ready to pass out. Eugenia recovered so fast, Juelle wondered if she had imagined her mother-in-law’s reaction.

“What the hell are you doing here? Get him out of here. He! Is! Not! Family!” Eugenia screeched.

Juelle did a double-take. If she considered Eugenia sounded like a banshee before, with her ear splitting shrieking, her tone now was so venomous it had everyone stopping in their tracks and staring in disbelief. The strange man was the first to recover. He walked into the enclosed room. Juelle recognized the astonishment in his pinched lips, raised eyebrows.

“I am family.” His voice was calm, well-modulated, and confident. “Allow me to introduce myself—Hunter McClintock. I assume you know my father?”

Juelle’s mouth dropped. She couldn’t form a single sane word. Eugenia, however, had no trouble.

“Liar! Hunt McClintock’s only son is lying in that bed.”

Posted by Katie O'Sullivan at 2:00 PM