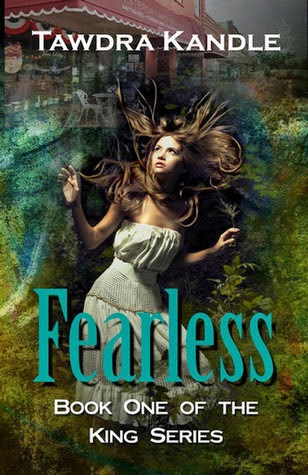 
Tasmyn Vaughn didn't expect much when her dad’s job moved them to a small town in Florida; it was just another new school. But there is more to King than meets the eye, and soon Tasmyn’s ability to hear other’s thoughts is the least of her worries. Entangled in a web of first love, quirky and secretive townsfolk, magic and blood rituals, she discovers the town’s secrets aren’t just bizarre, they’re deadly.

MY TAKE:
Fearless is a paranormal romance set in present day Florida, combining contemporary high school scenarios with witchcraft and ESP. The author does a good job creating interesting characters and settings, and setting up a world of characters to start this series.

Tasmyn is a high school junior, new to her school and to Florida in general.  Her family moves around the country a lot, both for her father's work and to keep her unique abilities a secret.

Tas can hear other peoples thoughts and feelings, and her parents fear the ability will land her in some government facility. While their paranoia might seem a little overblown, the mindreading does  seem to keep landing her in trouble quite frequently.

Right from the start, she meets a boy, Michael, whom she can't keep the secret from.  He's inexplicably drawn to her and their relationship is a whirlwind affair of insta love for both of them, which gives her an instant ally and insight into the strange insular community her family has moved to.

Founded by carnie folk years before, there are supernatural and mysterious elements afoot in the town, as well as witchcraft. Tas gets herself embroiled in a mean girl scenario with the head of the popular group, with her mindreading skills giving her strange visions of what the girls are planning.

The storyline held my interest inasmuch as I wanted to read to the end, but the plot twists were predictable and the insta-love was not all that believable. For someone who has spent her entire life hiding her gift and not having any friends, Tasmyn jumps into this new world of boyfriend-full-disclosure pretty quickly. Her parents also don't react how I would have expected, if they've spent their entire lives hiding their daughter's talents.

This is the first book of a series about these characters, but frankly I won't be reading more of them.  Interesting read, but in the end not as satisfying as I would have hoped.