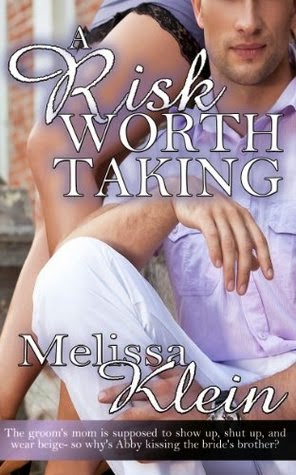 A Risk Worth Taking, by Melissa Klein
Published 2014 by The Wild Rose Press


The mother of the groom has three duties: show up, shut up, and wear beige. So why is Abby Roberts agreeing to a second dance with the bride's older brother, much less kissing him? After years of playing it safe, she's ready to expand her horizons--even accepting a teaching job in London--but is she ready for a sexy new man in her life?

Grant Davis agreed to walk his sister down the aisle, never expecting the groom's mother to awaken passionate feelings he thought buried. Since his divorce he's focused on his business and taking care of his daughter's special needs. But something about the way Abby holds her own makes him think this is a woman he wants to know better.

With Abby's departure looming, Grant has to work fast. Can he convince her to let go of past mistakes and take a risk on love?

Abby Roberts doesn't take chances. The last time she risked her heart, she ended up dropping out of college, pregnant.  But as she gets ready for her now grown son's wedding day, the single mom starts to think about her own future plans and upcoming move to finally step out of her comfort zone and move to London for a year in a teacher exchange program. She has a plan. Then one dance with the bride's brother turns her world upside down.

Grant Davis loves his much younger baby sister and would do anything for her, except stay away from her new sexy mother in law. A rich, hard working businessman, Grant is used to getting what he wants, when he wants it. His overbearing attitude might work well in business, but not so well with Abby. He will need to come up with other ways to win her heart, especially after a stolen kiss in the moonlight has him thinking about her constantly.

This is a sweet and sensual tale of second chances as life throws one road block after another into Abby and Grant's path to happily ever after.  Abby's gay best friend Chris deserves a book and love life of his own after sticking by her side through all of it!  While I think Abby gave up too much at the end, I enjoyed the back and forth of the book and it made for a satisfying read. Recommend for a rainy Sunday read!