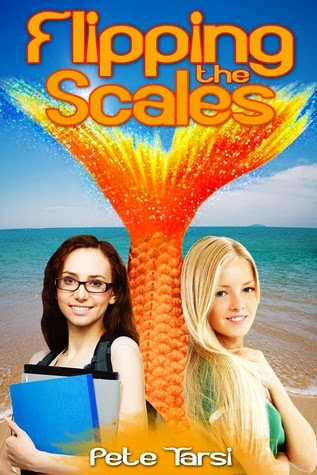 
Meredith and Marina’s lives have been flipped upside down.

Flipping the Scales is a switching places fantasy aimed at young adult readers. Although the characters are 17, the situations and language are very tame and suitable for ages 10 and up.

Meredith is a studious 17 year old, going into her senior year of high school and focused on getting into a good college. She doesn't spend a whole lot of time having fun, and packed mostly books in her suitcase for a two week summer vacation.  Her best friend Jill wants her to relax and have fun, to go with the flow at least for vacation at her cousin Hailey's house on a resort island.

Marina is also a 17 year old who is quiet and serious, with a best friend named Lorelei who tries to get her to lighten up and have fun on the same resort island. The difference is that Marina and Lorelei are mermaids, and their adventure entails transforming their tail into legs for one day during the full moon. Unfortunately, Meredith finds Marina's tail and mistakenly tries it on, transforming into a mermaid. Both are stuck impersonating the other until the next full moon when they can safely switch back.

Neither girl is familiar with the other's world, but with lots of help from their friends, this might just be the adventure of a lifetime.

It was fun to read another author's take on the mermaid world, and watch how his mermaids view the human world. Tarsi has fun with mermaid language, giving us teenage mer-slang as well as showing us there are still mean girl cliques under the sea, too.

Meredith is such a serious student that she describes things in textbook ways, or examines processes down at the scientific levels. Those parts made me chuckle as I know the author is a high school science teacher by day (mermaid author by night!)

My only critique would be the head hopping (a personal pet peeve), as the points of view are sometimes loose and interwoven. But all in all a solid debut from a new author with a fun new take on the mermaid world. I look forward to reading more books in this series, and totally recommend this for a fun, light read... and great for a beach read! 5 stars (in spite of the head hopping.)