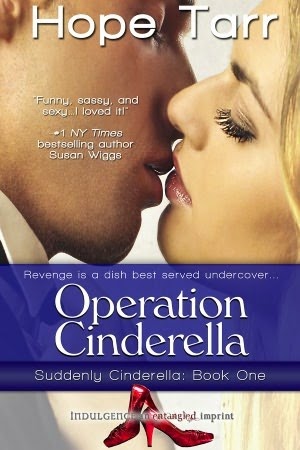 
Manhattan magazine editor Macie Graham always gets her story—and she’ll do anything to uncover the dirt on famous radio personality Ross Mannon. After he smears her article on his show, nearly costing Macie her job, she devises a plan to masquerade as a modern-day Cinderella and get her revenge on the infuriating Texan.

All Ross wants is a woman with old-fashioned values to be his housekeeper and role model for his troubled teenage daughter. When the perfect woman shows up, Ross is relieved—until he finds himself drawn to his gorgeous, red-stiletto-wearing new employee. “Martha Jane” is opinionated and sexy, and Ross is intrigued…and more than a little turned on.

Macie thought Operation Cinderella was foolproof, but Ross, with his rugged good looks and southern charm, proves to be as perfect behind-the-scenes as he does in public. But when she finally uncovers a secret that could destroy Ross's reputation, she faces losing her job or losing the fairy-tale ending she didn't even know she wanted.

My Take:
Macie Graham is a fast talking, jaded, thoroughly modern cliche of a NYC girl. Ross Mannon is the conservative radio phenom with Hollywood looks and charm and totally Republican talking points. When he rips into Macie's latest article on air and scares away one of the magazine's largest advertisers, she devises a plan to dig for dirt by taking a job as nanny to his teenage daughter.

Instead of finding dirt, she finds a troubled, single dad with good intentions and a heart of gold, and falls in love despite herself. There are so many cliched characters and situations strung together in this story that I lost count.

That said, I read through to "the end" and enjoyed the way the author tied up loose ends and made everyone come out okay. The epilogue should have been cut out and I confess to skipping it after the first few silly paragraphs, but it probably has something to do with creating a Cinderella series and needing to hook into the next story. Not interested, but enjoyed this diverting tale for what it was and give it 3 stars for keeping me reading to the end.