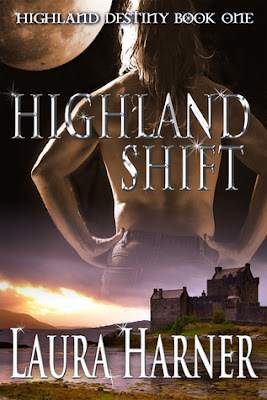 
The Highland Destiny saga begins in Highland Shift, a tale of betrayal, murder, and magick spanning two continents and hundreds of years.

Elena MacFarland wonders what everyone else knows about her new farm that she doesn't, and whether she'll live long enough to find out. Betrayed by her fiancé and the powerful Worthington family, Elena fights back and negotiates a comfortable settlement with one small caveat: she must live in Scotland for two years.

One kidnapping and two attempts on her life later, the darkly arrogant Scot, Faolan MacGailtry declares himself her new protector and moves into her farmhouse. Major problem? He was present at all three incidents. Elena decides to follow the adage to keep her friends close and enemies closer--but which is he? One by one, Elena uncovers Faolan's darkest secrets: his Druid heritage, his connection to her past, and finally, the deadly curse that is powerful enough to destroy them both.

Before I read this book, I'd already become enamored of the Outlander series on Showtime, but hadn't yet read any of Diana Gabaldon's books. I wanted more hot men in kilts, which this book delivered, but it also left me wanting. I recently devoured the first two books in Gabaldon's Outlander series and now know there is no comparison. This book is shorter, and lighter reading, but if you want characters that sizzle off the page, grab Outlander.


HIGHLAND SHIFT is not a traditional shifter story, centering the paranormal aspects more on the Druid magic and sorcery. It's the first of the series and doesn't have a satisfying stand alone ending, something I really dislike. I don't mind loose ends, but the author packed too much into the last few chapters to just say, okay, end of book one.

Elena MacFarland ended her engagement weeks before the wedding, but it wasn't her idea. Her future father in law arrived at her door with an agreement, ending the relationship and employment at the family law firm in exchange for settlement money and a piece of land in Scotland. Far enough from Arizona to keep her away from his son. On the transatlantic flight, she meets a man who stirs something inside her that she can't quite place. Big, broad and all man, his Highland brogue sets her inexperienced dreams on fire with sexual fantasies.

Faolan MacGailtry remains a mysterious character for much of the first half of the book, the story unfolding slowly and in fits and starts. The writing is inconsistent at times, some passages compelling, and others forgettable. The explanation of why Elena is still a virgin seems contrived, as well as some of the secrets she keeps from Faolan, even after she learns to trust him.  Keeping secrets about ones own past might be understandable, but secrets about magical things going on, even after she's brought in on the paranormal secrets of the home, just seems like a way to drag on the tension and leave time for more plot twists.

I enjoy Druid mythology, and shifters, and evil sorcerers, and stories of the fae... But I don't think I will be reading more of this series. You might have a different opinion (and if you want to read it just for the sizzling sex scenes, this is truly a winner. Hot stuff.)  I wish the author much success, but this story was not for me.

Posted by Katie O'Sullivan at 9:45 AM