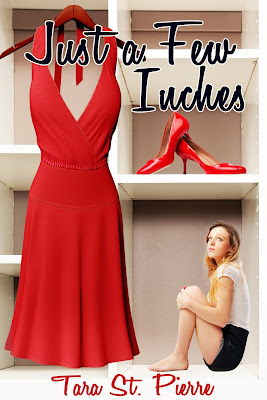 Here's a new YA with an interesting twist on the issue of teenage body issues... in an effort to be "perfect" for her boyfriend, a high school senior has a run in with diet pills and actually starts to shrink! A little bit paranormal, but a whole lot of high school angst. Am in the middle of reading this and promise a full review soon!

In the mean time, here's the blurb and an excerpt to give you a taste!

All Carrie Roberts wants is to be a little bit smaller.

To fit into the perfect dress for the Valentine’s Day Dance. To look beautiful for her boyfriend, the school’s star basketball player. To keep his jealous ex-girlfriend, a rival cheerleader, away from him. And to be noticed by her classmates.

Exercise and dieting don’t work, but an advertisement for weight loss pills promises a quicker solution to her problem. As time runs out, she takes more than the recommended dose until she’s just a few inches slimmer. Heads turn when she arrives at the dance, and the wonderful night with her boyfriend is beyond what she dreamed it would be.

Days later, Carrie discovers that her body is changing in ways that should be impossible. While her doctor searches for a cure, she desperately turns to her friends and family for support. Everyone is noticing her now whether she likes it or not, and even the media is intrigued by her incredible story. Getting everything she once wanted has created new problems—problems that are growing more terrifying every day.

Because Carrie Roberts is shrinking.

****
“Just a Few Inches” is a Young Adult Novel that deals with issues of body image, self-esteem, and teenage relationships. It is intended for readers age 13 and up.
EXCERPT:
I tried keeping my mind on the game instead of worrying, but every time I bounced, a bra strap would slide off, constantly reminding me that something strange had happened to my body.

It was worse during our half-time routine. Towards the end, the squad split up into groups, each holding someone up in the air and letting her fall back into our arms. I was part of a group of five girls helping to lift Trish. My job was to cup my hands underneath Trish’s right foot while she was raised into the air. Two of the other girls held her calves in place, a third spotted from behind, and Janelle had her left foot since she and I were supposed to be the same height. I found myself having to stretch my legs and arms more than I should have needed to keep Trish’s feet even.

When Todd found me after the game, I clung to him, and he innocently said, “Stand up straight so I can rest my chin on your head.”

“I am standing up straight,” I mumbled.

Then came an awkward moment where we both looked at my legs and feet to verify my claim. I was definitely shorter than I had been the week before. Todd simply stared at me, not knowing what to say.

Lauren witnessed the incident, and we gave the details to Trish in my car, after I adjusted the driver’s seat forward one click. Keeping one hand on the steering wheel while the other wiped away tears collecting in my eyes, I asked, “What’s happening to me?”

From the back seat, Lauren put her hand on my shoulder. “Don’t panic. There’s got to be a logical reason why you’ve gotten shorter.”

“It might be some weird side effect of those pills. You did take a lot of them.”

Her voice had a told-you-so tone to it, but she was right. How could I have been so stupid, so careless, so desperate? “What should I do?”

Sitting in the passenger seat, Trish turned to me and flailed her arms as she spoke. “If you stopped taking them, the effect will reverse itself. That’s how it works with my mom. She always puts the weight back on no matter what diet she tries.”

In my rearview mirror, I could see Lauren roll her eyes before asking, “You still have the pills, right? First thing you’ve got to do is tell your mother—”

The car swerved as I exclaimed, “No way! I can’t tell her! She’ll freak out when she finds out what I did.”

“She’s going to figure it out. She knows how tall you’re supposed to be. Look how quickly Todd noticed.”

“There are ways to make you look taller,” said Trish. “All it takes is the right pair of shoes until this wears off.”

There was an uncomfortable silence. I was pretty sure Lauren and Trish were wondering the same thing I was wondering: what if it didn’t wear off?
****
BUY LINKS:
Amazon: http://www.amazon.com/dp/B00XX8HGUS
Barnes & Noble: http://www.barnesandnoble.com/w/just-a-few-inches-tara-st-pierre/1121971906
Apple iTunes Bookstore: https://itunes.apple.com/us/book/just-a-few-inches/id997071232