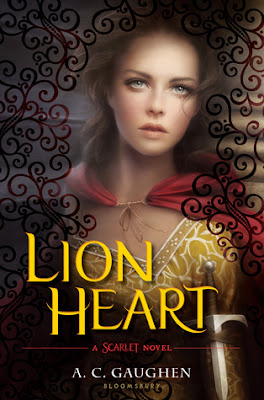 
Scarlet has captured the hearts of readers as well as the heart of Robin Hood, and after ceaseless obstacles and countless threats, readers will finally find out the fate of the Lady Thief.

Imprisoned by Prince John for months, Scarlet finds herself a long way from Nottinghamshire. After a daring escape from the Prince's clutches, she learns that King Richard’s life is in jeopardy, and Eleanor of Aquitaine demands a service Scarlet can’t refuse: spy for her and help bring Richard home safe. But fate—and her heart—won’t allow her to stay away from Nottinghamshire for long, and together, Scarlet and Rob must stop Prince John from going through with his dark plans for England. They can not rest until he’s stopped, but will their love be enough to save them once and for all?

Where do I start? How can I convey in a few paragraphs how much I absolutely loved this entire series? If you like retellings or tales of Robin Hood, you have to check out this series. AC Gaughen does a wonderful job bringing the legend to life and giving us strong, empowered women who will inspire girls to choose their own path and fate.

Gaughen paints Robin Hood and his time period in vivid and real ways that make the reader feel like they are actually there and living through every situation and battle alongside Scarlet and Rob.  The historical accuracies infused into the tale, from the squalid conditions in the streets of London to the excesses of the upper classes, made the story resonate with realism and come to life for the reader.

I downloaded and read the third and final book of the trilogy yesterday and, as I did with book two, I'm sorely tempted to start at the beginning and retread the whole thing again today. It's that good.

In the first book of the series, Scarlet, we meet our narrator and Robin's small band of outlaws. We learn quickly that Will Scarlet has more secrets than anyone knows-- the first of which being she's not a Will at all. And shes falling in love with her hero, Robin Hood. The second book, Lady Thief, continues the story, raising the stakes on both their forbidden love and the inner demons each wrestles with. The harrowing conclusion to book two made me chomp at the bit for months in anticipation of this final story... And it was well worth the wait, living up to most of my expectations. I thought I wanted a more definitive conclusion to the series, but found the author left some of the adventures unfinished and in the end, that was just fine.

Scarlet is a strong, feisty, willful heroine and some will think her anachronistic to the historical time period. But as the author points out in her afterword notes, every time period in history has had strong, feisty women changing things. It's the men who write the history books who tend to leave those parts out. I took a college course long ago on women and theology, taught by Marilyn Thie, a former nun and fabulously brilliant women's studies professor. She showed us many instances of "lost" texts and hidden histories where women played much larger parts than the currently acceptable biblical and historical teachings lead us to believe.  A second class with her had us reading biographies and autobiographies of famous historical figures, showing the power women have had to change history throughout the ages, even into modern times, and yet many of these figures were previously unknown to me.

Could the legend of Robin Hood have played out in real life more as Gaughen reimagines it in this series? Damn right it could have. While I've always had a thing for Robin Hood and his band of merry men, this is my new favorite version of the legends, and I hope everyone gets a chance to read and enjoy this series.

Buy it at your local bookstore or order it on Amazon - but grab this series for your summer reading! And while you're at it, treat yourself to the whole trilogy if you haven't tried it yet. You'll be so glad you did.

Posted by Katie O'Sullivan at 9:59 AM