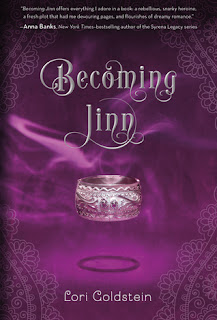 
Forget everything you thought you knew about genies!

Azra has just turned sixteen, and overnight her body lengthens, her olive skin deepens, and her eyes glisten gold thanks to the brand-new silver bangle that locks around her wrist. As she always knew it would, her Jinn ancestry brings not just magical powers but the reality of a life of servitude, as her wish granting is controlled by a remote ruling class of Jinn known as the Afrit.

To the humans she lives among, she’s just the girl working at the snack bar at the beach, navigating the fryer and her first crush. But behind closed doors, she’s learning how to harness her powers and fulfill the obligations of her destiny.

Mentored by her mother and her Zar “sisters”, Azra discovers she may not be quite like the rest of her circle of female Jinn . . . and that her powers could endanger them all. As Azra uncovers the darker world of becoming Jinn, she realizes when genies and wishes are involved, there’s always a trick.

I met this author at a recent YA event on Cape Cod, and really liked her a lot. She was fun to chat with, easy to get along with, and I bought a hard copy of her book to give my niece who is currently performing in a stage production of Aladdin. While I enjoyed reading the story myself, I'm not going to be giving it as a gift for various reasons that can be summed up as inappropriate behavior that doesn't elicit appropriate consequences. I think the storyline as written would probably be better suited to an 18-year-old protagonist instead of 16, and a New Adult audience rather than a Young Adult one. But let me start at the beginning.

Azra is a moody sixteen-year-old full of attitude and a healthy disregard for rules, which leads her into all kinds of trouble. We meet her the morning of her sixteenth birthday, when she's just been granted her full powers as a Jinn, a magical race of genies who live in the human realm and grant wishes, like in storybooks but with a slight twist. A human only gets one wish, and they won't remember that the jinn granted it. The jinn also don't get to choose whom to grant wishes to, the almighty Afrit council does that for everyone.

Azra has felt different and left out for most of her life, or at least ever since her best friend (a human) died in an accident where magic couldn't save her. Since that day, she's resented the magic and been scornful of the powers her race possess. What good are powers if they can't save the people you love? She feels like a loner in the human world, unwilling to get close to anyone again, and a loner in her own Jinn circle, unwilling to embrace the magic. Now sixteen, she has no choice but to face the magic and its consequences.

She makes some really poor choices, which is normal in YA/NA, but each bad choice seems to lead to more, and get her deeper into trouble. Some bad choices lead to surprising discoveries, shedding light on secrets that have been shadowed all her life. I felt frustrated when some of the teen's bad choices didn't seem to have repercussions - for example, the teen Jinns use their magical powers to conjure fake IDs and get great tickets to see their favorite band. The parents don't seem to care about their daughter's underage drinking, or limit their use of powers. At one crucial point in the plot, there is more underage drinking that leads to tragedy, but nothing seems to happen to the teens who cause the problems. Yes, YA is supposed to have characters who push the rules and limits, but it doesn't hurt to show the trouble the rule breaking may cause and have the characters face their consequences.

The world and myth building is wonderful, and I loved the backstory to the Jinn and their powers. The troubled and complicated relationships between mothers and daughters all ring true, as well as the complicated relationship Azra has with her Jinn sisterhood. I enjoyed the author's writing style, storytelling and use of language, but felt as though some crucial bits might have been cut or curtailed by a well-meaning editor, leaving some of the scenes a little more hollow than I would have liked and a little loose around the timeline. And unfortunately, the story ends without a satisfying HEA or happy-for-now ending, making me NEED to read the next book to tie the loose ends that this one left dangling in the wind.

All in all an enjoyable read, and I'm looking forward to grabbing the sequel next spring.
Posted by Katie O'Sullivan at 4:00 AM