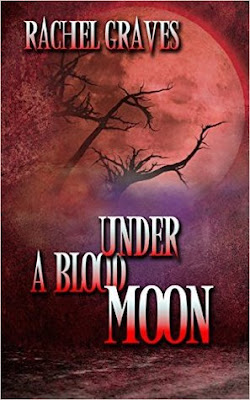 Under a Blood Moon, By Rachel Graves
Published 2015 by The Wild Rose Press

Mallory Mors, death witch and detective with Baton Rouge’s Supernatural Investigative Unit, controls every aspect of death; she can even touch a dead body and know how it died. When she’s called to the scene of the city’s first zombie attack, her magic leads her to a voodoo queen who claims to be controlled by werewolves.

The Werewolf Protection League, a political organization fighting for werewolf rights, insists they have nothing to do with the killings. As the kidnappings and murders continue, everyone becomes a suspect. Aided by her boyfriend, a six hundred year old vampire, and all the supernatural citizens of her city, Mallory fights to close a case that may claim her life.

In a world where supernatural creatures are commonplace, Mallory Mors is still unusual. She is a Death Witch, the last of her kind, and she works in the supernatural division of her local police department. She can touch a dead body and know how they died, as well as visit a crime scene and "see" the murder occur. She can also raise the dead, but she's not the one creating zombies and stirring up her city. She is, however, the one they call on to solve the crime.

Except, it turns out that the zombies aren't the real problem. That would be the out-of-control werewolves.

This story jumps in midstream and keeps up a swift pace. I kept thinking that maybe I'd missed the first book in the series, but, no, this is book one. The author drags us along for a wild ride, filling in the blank spaces along the way. If you enjoy Charlaine Harris's supernatural South, you will love this sassy take from a new author. Rachel Graves does a wonderful job of revving the engines and keeping her foot on the gas pedal for a fast, fun ride.

I loved Mallory's insecurities, her funky witch friends and her steaming hot vampire boyfriend. The plot twists kept me turning pages, although I have to admit the some of Mallory's choices were head scratchers. When you're investigating bloodthirsty werewolves DON'T GO ALONE. Shades of Jamie Lee Curtis, for goodness sakes!

Despite her occasional lack of good sense, I really liked the main character and can't wait to read her next adventure. (And Rachel Graves, there had better be a next adventure soon! Fans are waiting!)

Totally recommend this book for fans of Harris's Sookie Stackhouse and J.C.McKenzie's Andrea McNeilly. Paranormal romance and adventure at its hottest!

I received an ARC of this book in exchange for my honest review.


Buy the Book on Amazon.
Posted by Katie O'Sullivan at 4:00 AM