Monday Book Review: Echoes of the Past, by Emma Kaye 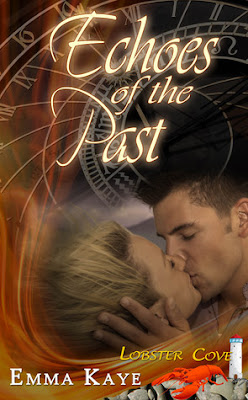 Echoes of the Past, by Emma Kaye
Published December 2015 by The Wild Rose Press


In 1692, Isabeau Munier cast a spell to flee Lobster Cove and escape burning at the stake for witchcraft. Instead, she’s trapped by a curse that tosses her through time whenever she attempts to leave the small town. With her curiosity shop and Great Dane familiar, Isabeau has finally found her place in time. When her landlord’s sexy nephew moves in, she thinks she may have found Mr. Right as well.

Grayson Wright’s intrigued by the beautiful Isabeau, but a friend’s accusations make him worry Isabeau took advantage of his beloved uncle. Gray’s determined to learn the truth, even at the risk of losing his heart.

Can Isabeau prove she’s not the gold-digger Gray fears and that her love for him is true? Can Gray learn to trust his heart, which tells him Isabeau’s the perfect woman for him? Or will Isabeau’s curse take the chance away from them both?

I have to admit, I've been a sucker for time travel novels well before I ever heard of Outlander (although, yeah, that is one awesome series!) I also admit that I read and loved Emma Kaye's FOR YOU Valentine novella back in January or February, without even knowing the author had this other story out there. When I found out she had this Lobster Cove time travel romance, I grabbed a copy.

I guess I didn't realize it's a novella, and was disappointed when the story ended, but if you go into it with the proper expectations, it's a wonderful tale.

Isabeau Munier is a witch who was able to escape being burned at the stake in the 1690s by transporting herself through magick away from the flames. Unfortunately, her spell twists so that instead of leaving her small town, she leaves her time period and ends up almost 300 years into the future, landing in the 1960s. Isabeau eventually realizes that she can't physically leave the borders of the town now known as Lobster Cove, or else the time travel spell is triggered and she ends up hurtling into another era once again.

After fifteen years of bouncing through time, she's come to terms with that limitation - hey, better than burning at the stake - and is at peace with her life, until a new man returns to Lobster Cove and turns her emotions inside out.

Grayson Wright (Mr. Right? LOL!) is immediately intrigued by the sexy blonde renting his uncle's property - property that has now been passed down to him. As Isabeau's new landlord, he finds himself oddly curious about the woman and her relationship with his uncle. Sparks fly between Gray and Isabeau, until it becomes too hard for her to keep her secrets from him.

Will he - can he - believe her story?

I whipped through this book in a few hours and enjoyed every minute. I would have loved to see the whole tale slowed down and drawn out - maybe even include a few more scenes from other time periods. But for a novella-length story, it was well-plotted and engaging, leading to a satisfying conclusion. I loved Isabeau's strong-willed character (although I truly hated her name) and while I would have liked some more development of Grayson's character as well as his Uncle Stan, I liked the way the author dealt with all of her characters. There were enough loose ends that it left me wondering about a lot of things and wishing there was more to read. A sequel maybe? Or a long-version of this same story? *sigh* I also felt like the cover didn't convey the tone of the story as well as it could have - I mean, yes it starts with a witch about to be burned at the stake, but the general tone of the story is more of a slow burn than the whirlwind suggested by the cover art.

If you enjoy time travel romance, I totally suggest giving this quick read a try. Enjoyable, intriguing and filled with romantic tension, this made for a great evening of summer reading.

Grab a copy on AMAZON.
Posted by Katie O'Sullivan at 6:00 AM

Email ThisBlogThis!Share to TwitterShare to FacebookShare to Pinterest
Labels: #Review, #TWRP, Echoes of the Past, Emma Kaye, For You, Monday Book Review