Monday Book Review: Summer with a Star, by Merry Farmer 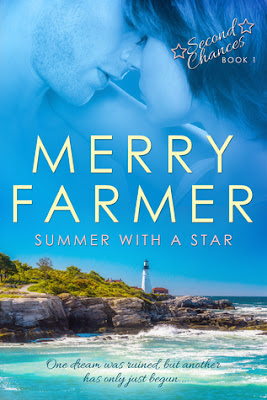 Summer with a Star, by Merry Farmer
Published 2015


All Tasha Pike has wanted for the past twenty years is to rent Sand Dollar Point for a summer. The grand Victorian on the beach of Summerbury, Maine was the object of her childhood fantasy and her standard of romance—and it was finally happening.

Her dream summer is ruined, however, when she arrives in Summerbury to find that Hollywood superstar Spencer Ellis has muscled his way into the house instead. His offer that they share Sand Dollar Point is not only infuriating—it’s insulting.

He’s a celebrity—and one she’s determined to hate.

Spencer’s summer in Maine was supposed to help him get his head screwed on straight. One look at Tasha, however, made that impossible. She’s beautiful. She’s angry. She doesn’t care who he is. She doesn’t care about his fame. In fact, she doesn’t even like him.

This cover drew me in and whispered "beach book." The cover was not wrong, and although I read this during one cold, rainy afternoon, the story transported me to its seaside locale and I forgot all about the nasty weather. The author does a really wonderful job giving the reader the sights and feel of living in an oceanfront mansion in a small, seaside village, as well as giving us well-drawn characters who are total opposites in every respect. Good thing for the reader that the cliche about opposites attracting is really so true!

School teacher Tasha Pike has been planning this summer by the sea in her dream home for years. Twenty years, actually. It took her that long to save up the money, but she doesn't regret any of the sacrifices...  Until she realizes the realtor made a last minute deal with someone else, just because he's a big time movie star.

Spencer Ellis is seriously burned out after back-to-back films and needs a break, so his agent finds him a house on the beach away from it all to rest and find his balance. No matter that the house had already been rented for the summer, nothing a wad of cash can't fix.

Except when the brunette shows up on his doorstep and bursts into tears, Spencer can't help himself, and he offers to share the house with her for the summer. (Because that kind of thing happens all the time. Well, this is a romance novel, so a certain suspension of belief is in order.)

This is a light, fun romantic romp with a few twists, a couple sordid secondary characters to spice things up, and a whole lot of summertime fun. I thoroughly enjoyed the characters and the story which kept me happily turning pages until the satisfying conclusion. This would be a great book to take on vacation, for reading on the beach, or cuddled on the couch during a summer downpour.