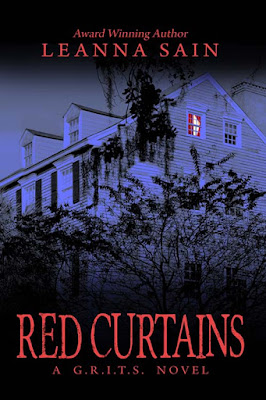 RED CURTAINS, a G.R.I.T.S Novel (*see explanation of the acronym below)
by Leanna Sain
Published September 2016 by The Wild Rose Press

Jonas Holmes, an investigative reporter for the local paper, is asking the question: why do bodies of homeless men keep showing up in the river? But the homeless are scared and won’t talk to him. When he finds Cleo and Lily, he thinks his problems are solved; he doesn’t realize that they’re just beginning.


TUNE BACK IN ON MONDAY FOR MY REVIEW OF THIS REALLY FUN READ! GHOSTS AND ROMANCE IN SAVANNAH - LOVED IT! AND THE AUTHOR SHARED A NICE LONG EXCERPT WITH US TODAY FOR FRIDAY FUN...


“Cleo!” she greeted me joyously, as if we were long, lost friends instead of mortal enemies. “It’s so good to see you!”


“Ellie.” Her eyes narrowed at my mispronunciation, but she didn’t correct me. I gave her a cold stare. The only thing that kept me from yanking her out of my seat by her dark rooted, bottle-blond hair was sheer, iron will.


“I saw you come in earlier,” she trilled in her fake- friendly voice. “I wanted to be sure to come tell you ‘hi.’ Imagine my disappointment when I finally made it to your table and found you were gone. But luckily...”  she gave Jonas an impudent smile. “...this nice man  was good enough to let me sit here and wait for you.”


Finally made it to my table? Yeah, right. I was sure  she’d waited—on purpose—for me to leave before she  swooped in. I’d seen this act before, and I thought I was  ready for it, but I guess I wasn’t. When she finished her  little performance with a wink, I think I may have growled.


“Well, that worked out well for you, didn’t it?” My  smile was brittle. One false move and my face might  shatter into a thousand little pieces. I waited stiffly for  her to vacate my seat. Could a person’s blood actually  boil?


Jonas was casting an uncertain look between the  two of us. I’m sure he was astute enough to feel the  undercurrents. He might not understand them, but he  had to be aware of them.


Then he sort of jumped, shoulders stiffening, eyes  widening in shock as he stared across the table. What  was that about? I glanced at Ellie, looking for an  answer. Uh-oh. I knew that look. I’d seen her use it  often enough. It was her “come and get me” expression—gazing up through her mascara thickened  lashes, a seductive smile curving her lips, promising  things I didn’t even want to know about—the look that  reduced men to puppy-like creatures, eager to please. A  movement under the table caught my eye and my jaw  dropped. Ellie’s stiletto-clad foot was rubbing suggestively up and down Jonas’ leg. Obviously, Ellie  had no intention of relinquishing her spot at the table.


Oh, no you don’t, girlfriend! Not this time!  I made a totally out-of-character and utterly rash decision, praying that Jonas would just go with it and  that it wouldn’t backfire. I slipped into the seat beside  him, snuggling up close. “I like it better on this side,  anyway.”


I’ll have to hand it to him. It only took him a split  second of startled uncertainty before he dropped his  arm around my shoulder, pulling me even closer. He  put his lips to my ear, whispering, “I guess you’ll explain what’s going on later?”


His warm breath against my ear caused goose  bumps to shiver along my arms and down my legs, but I  dimpled up at him and answered, “You know I will.”


Turning to Ellie, I almost shouted over an explosion of  laughter from the bar. “Isn’t he a sweetheart? I just love  him to death!”


Ellie’s expression had become a bit frosty and I  almost giggled with delight. It felt wonderful to be  vindicated. Not to mention, it was very, very cozy to be  snuggled up against Jonas like this.


She slid toward the outside edge of the seat. “It was  good to see you, Cleo. Happy holidays. Nice to meet  you, Jonas. Maybe we could meet for a drink  sometime?”


Ellie’s jaw tightened. “Of course. See you later.”  She spun around and stalked away, swaying a little on  her four-inch heels. 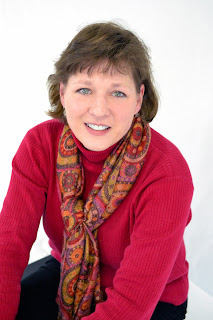 North Carolina native, Leanna Sain, earned her BA from the University of South Carolina, then moved back to her beloved mountains of western NC with her husband. Her “Gate” books have stacked up numerous awards, from Foreword Magazine’s Book-of-the-Year to the Clark Cox Historical Fiction Award from the North Carolina Society of Historians. Sain’s fourth novel, WISH, is a stand-alone, YA crossover.

Her Southern romantic suspense or “GRIT-lit,” showcases her plot-driven method of writing that successfully rolls the styles of best-selling authors Mary Kay Andrews, Nicholas Sparks, and Jan Karon into a delightfully hybrid style that is all her own. Regional fiction lovers and readers who enjoy suspense with a magical twist will want her books.

She loves leading discussion groups and book clubs. For more information or to contact her, visit: www.LeannaSain.com

*G.R.I.T. = Girls Raised In The South, a series of books with main characters who are strong, creative, successful Southern women -- GRITS, if you will.

Or grab it on AMAZON