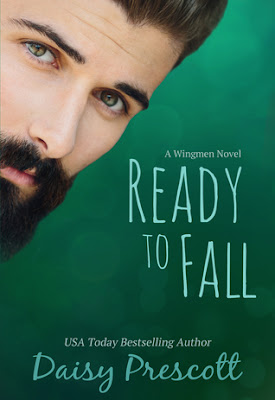 
Tall, dark, and handsome is an understatement when it comes to John Day. With rugged good looks, his ever present plaid shirt, and a dog named Babe, John is a modern alpha male lumberjack.

After his favorite neighbor rents out her beach cabin for the winter, John finds himself playing fireman and tour guide to Diane Watson, a beautiful brunette with her own messy past and recent battle scars.

Will he be ready to fall in love? Or will he go back to his old, flirty ways?

Hold onto your heart as John Day tells his story in this male POV contemporary adult romance/romantic comedy.

Ready to Fall is the first novel in the Wingmen series, a spin-off from Modern Love Stories. Each book is a standalone with no cliffhanger.

This book was different for me, in that it's a contemporary romance written in first person from totally the hero's perspective. Yup, all first person and all from the main guy's POV, not one chapter with anyone else narrating. I had to check a few times, flipping back to the cover to make sure the author was really named "Daisy" as she spot on seemed to nail the male POV without making him sound like, well, a dick. Yes, he has a dick, no he doesn't act like one. Well, sometimes. But then again, don't all men?

Our narrator, John Day, lives on an island off the coast of Washington state and is a burly, six foot something forestry manager. Okay, a bearded lumberjack, with a dog named Babe (a la Paul Bunyan). His neighbor rents her cottage for the winter to a woman from New York City going though a messy divorce and needing a place to recover. John first meets Diane Watson in the middle of the night when she sets off her smoke alarm by not opening her flue.

Sparks don't immediately fly, since Johns already in a relationship and Diane just got out of one, but they begin to form an easy friendship as he helps her to acclimate to island life and she helps him to work through deep seated issues of his own. Like I said, it's really interesting to be reading this progression from only the male POV, as he describes what's going on and what's said, and his interpretations of the events. The author does a good job of conveying both what's going on between the unlikely couple as well as showing the reader how misunderstandings occur since males and females interpret both events and sometimes words in different ways.

This wasn't a fast read or a thrill ride, but a quiet satisfying story that will leave you alternately frustrated and laughing, and ultimately smiling at the satisfying conclusion. Maybe not a beach read, but certainly a great book to curl up with for a rainy weekend.

Find your copy on AMAZON
Posted by Katie O'Sullivan at 5:00 AM