Monday Book Review: The Taming of the Bachelor 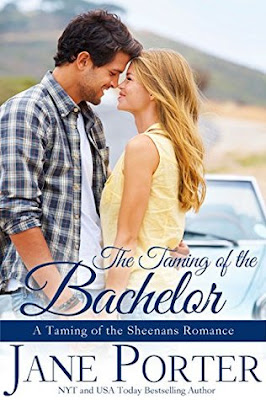 The Taming of the Bachelor, by Jane Porter
Published 2015 by The Tule Publishing Group


Dillon Sheenan refuses to be tamed…

After three years running the family ranch, sexy thirty-year-old Dillon Sheenan has a one way plane ticket out of Montana. He’s eager to put small town life, with its emphasis on brides, babies, and families, behind him as he’s certainly not interested in being a dad, or even ready to settle down.

Beautiful single mom, Paige Joffe, juggles a lot, between running Main Street Diner and coping with her money-pit of a Victorian on Bramble Lane. She doesn’t have time for anything but taking care of the loves of her life, Addison and Tyler, and working to pay down bills. But one date–and an incredibly hot kiss–with Dillon Sheenan wakes her up and makes her dream again.

Is Dillon about to break the heart of the only woman he’s ever loved?

This is a different kind of cowboy romance, featuring a strong-willed single mom and a semi-reluctant cowboy. I loved the dance back and forth between the main characters as they navigate their way through the minefield of their complicated feelings for one another and the baggage they each carry.

This book is part of a series about this small Montana town and this one particular family, but judging from this book (which is the only one I've read so far) these seem to be stand alone stories. They may build upon one another, but I never felt lost or unclear about characters or history.

Dillon Sheehan grew up as one of five brothers on a Montana ranch, but he was also the Valedictorian with perfect SAT scores with a full-ride East to MIT. He made his mark on the biotech industry in a big way, but was forced to take a leave of absence to care for his ailing father after his older brother went to jail. Now three years later, his father has passed away, his brother is home again to run the farm, and his former company is begging him to make a comeback and lead them back to profitability. He's ready to put his hometown back in the rear view, except...

Paige Joffe is a soft-spoken single mom, a transplanted California girl with a sunny disposition that belies her strong will and determination. Dillon admires her grit and has harbored a crush on her for years, but he knows better than to date a single mom. No way he wants to put down roots in his hometown.  Except...

Now that he's on his way out the door, he somehow lets down his guard enough to let Paige in. Will he still be able to move away?

As the mother of a science geek, I totally appreciated the twist on the usual cowboy theme to include nerdy interludes between Dillon and Paige's own science geek son. The romance between the characters was slow and sweet and frustrating as Dillon kept trying to second guess everything... But again, thinking of my own son,  his character was so totally believable and enjoyable even as it was frustrating. This made for a fun, fast read and I just may be looking for more books by this author to read more about the Sheehan clan.

Find your copy on AMAZON.

Email ThisBlogThis!Share to TwitterShare to FacebookShare to Pinterest
Labels: #cowboys, #Review, #romance, Monday Book Review, The Taming of the Bachelor