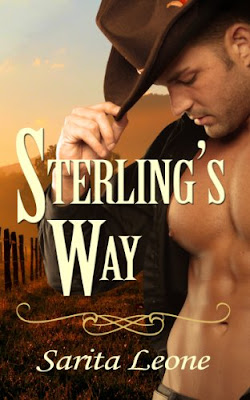 
Jack Sterling isn't having a good day. A swindler has stolen family property from his elderly grandmother and Jack has taken the law into his own hands to steal it back. Only the stagecoach he intends to rob is under fire, forcing him to rescue the very occupants he’d planned to rob. One glance at the beautiful woman inside nearly has him forgetting why he’s there in the first place.

Kristen March has fled Boston to avoid an arranged marriage between moneyed families. She’d rather take her chances on the untamed frontier than marry a man she doesn’t love. But the Wild West proves to be more adventure than she anticipates when her stagecoach comes under attack.

Not only does handsome Jack come to her rescue, he makes it clear he plans to court her. But both are keeping secrets that could tear them apart for good.

The totally hot and yummy cowboy on the book cover ... has absolutely nothing to do with this super sweet romance set in the Wyoming territory of 1874.  Don't get me wrong, it's a well written, sweet romance, with what seems like a lot of research and proper use of language and manners. It's just really not what I expected from the cover.

Okay, that said, this is a nice historical fiction and sweet romance between a woman running from an arranged marriage back in Boston and a man trying to right a wrong done to his family farm in Kansas. Both are new to the small Wyoming town they find themselves in, which is different than either imagined. Minor conflicts are thrown at both characters, but no dire or dangerous circumstances or life and death decisions. Really, this is just a nice book of two unlikely soul mates finding their way to each other.

If you like sweet, historic romance set on the frontier, try this novel on for size. Ignore the rippling abs on the cover, since that's the only place they appear.

Posted by Katie O'Sullivan at 9:16 AM