Monday Book Review: Beyond the Mist, by Casi McLean 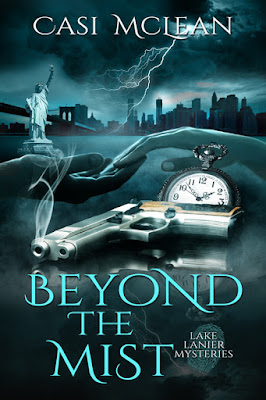 Beyond the Mist, by Casi McLean
Published September 15, 2017 by The Wild Rose Press


Piper Taylor concedes she’ll never fall in love, until a treacherous storm spirals her into the arms of the handsome Nick Cramer. Unrelenting remorse over a past relationship haunts Nick, but he can’t deny the mysterious connection and hot desire Piper evokes.

The allure of a secret portal hidden beneath Atlanta’s Lake Lanier tempts him into seizing the opportunity to change his mistakes. But his time slip triggers consequences beyond his wildest dreams.

Can Piper avoid the international espionage and terrorism of 2001 New York, find Nick, and bring him home before he alters the fabric of time, or will the lovers drift forever Beyond The Mist?

Casi McLean gives us another intricately plotted time travel, filled with romance and suspense that spans the years, and takes the reader back to one of the most devastating dates in recent U. S. history, 9/11.

The author lovingly paints a well-researched portrait of 2001 New York City, in the days leading up to the catastrophic event, with great attention to detail. The characters who travel back in time are the only ones who know the horrors about to unfold, filling them with emotional upheaval on so many levels. How would it feel to know thousands are about to die horrific deaths and not be allowed to stop the terrorist event? Would you be able to walk away? This is the moral dilemma the characters face, and we as readers struggle along with them.


Nick Cramer is a man haunted by this particular day in history, and when he figures out time travel is real, he jumps at the chance (quite literally) to go back in time to fix his mistakes and change the past, despite the fact that absolutely everyone tells him not to affect any changes, that ripple effects have unforeseen consequences. When it becomes obvious in the future that Nick has messed with the past, they send one more traveler through the void - Piper Taylor - to figure out what went wrong. Can she figure it out and stop him before it's too late? Can she heal his misery and guilt? It's a race to save the future, amidst the shattering reality that was 9/11.

I'm a sucker for anything with time travel, and I enjoyed this story. I have to admit that Nick's character bothered me a lot, as he was weak willed and kept doing the absolute wrong things, even if it seemed like it was for the right reasons. Piper had been such a flibberdigibbet (love that word) in the first book that I was happy and surprised to see her inner strength emerge in this book - great growth of character.

I do have to disagree with some other reviews I've read, though. You really should read the first Lake Lanier mystery first in order to fully enjoy this story (like Piper's character arc, for example.) Yes, you could read this as a standalone story. It has a definite story arc all its own and an ending that doesn't leave the reader dangling.

The characters are too intertwined and the time travel anomalies too twisted to get the full impact without reading the first story. In fact, now that both are available, you can even read them one right after the other.

Posted by Katie O'Sullivan at 9:38 AM