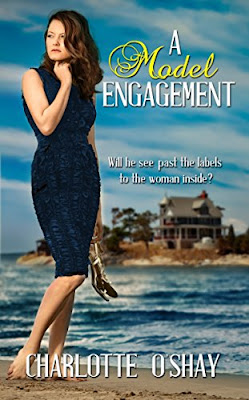 A Model Engagement, by Charlotte O'Shay
Published September 2017 by The Wild Rose Press

Charlotte O'Shay gives us a heartwarming story of two very different people who aren't looking for love, but end up being the perfect fit. This is a slightly different take on the fake fiancé story line, and the he said/she said alternating third person narrative makes for a fun, fast read.

Lacey Lee Reed was a minor character in O'Shay's debut novel, The Marriage Ultimatum. Here we get to look inside the facade she presents to the world, and discover that the former model is not as carefree as she would lead everyone to believe. In the very first chapter, we find out she's being blackmailed and practically broke because of it. And getting desperate.

When Connor Devlin sees Lacey at his friend's wedding, he's more than a little intrigued by the voluptuous maid of honor. He's not a "relationship" kind of guy, but there's something about Lacey that makes him want to know more. He's sitting next to her when she gets the news that she didn't get the job she was counting on, and ends up impulsively offering her a position as a caretaker for his aging mother. The catch being that his mother is proud and stubborn and won't allow a nurse in the house, so Lacey will have to pretend she's Connor's fiancé, a fact Connor neglects to share until it's too late for her to back out of the deal.

I'll stop there because I don't want to give away any of the twists this story takes. Suffice it to say the story keeps the pages turning, and the reader routing for both of the main characters to swallow their stubborn pride and figure out just how well they fit together in so many ways.

In terms of star ratings, this gets 4.5 stars for an engaging story and characters, and 4 out of 5 for readability. I think the editor should have wielded a firmer hand in several instances and taken out a few repetitive phrases, but otherwise this is a charming story and well worth the read.

Grab a copy of this book on AMAZON