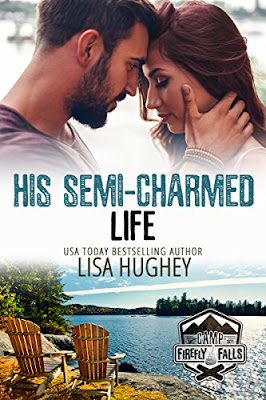 
Going from princess to pauper wasn’t exactly the fairy tale ending Penelope Hastings believed in as a kid. She grabs at the opportunity to work at Camp Firefly Falls—home of her most treasured childhood memories and the haven where her spoiled heart expanded, and her perspective changed, after an encounter with an older boy. Now she’s hoping that the camp can work its magic one more time and help her craft a new life.

Rags to riches entrepreneur, Diego Ramos, never wanted to see Camp Firefly Falls again—the site of the most hated year in his teenage life as camp counselor, and his most regrettable moment ever. That one clash with an entitled little girl had a profound impact on him, changing the trajectory of his future. So, when his assistant books a corporate retreat at Camp Firefly Falls, he’s more than a little unsettled at the irony.

Now, twenty years later, Penelope and Diego are reunited. A second chance at happiness won’t come easy when their reversal in fortunes and unexpected sexual attraction complicates everything. Will they be able to work through their regrets and memories, and learn that love is the greatest fortune of all?


Are you thinking of Dirty Dancing? Yeah. So were we. And Indian Summer, and all those fantasies we had about making out with Matthew Broderick on the dock…

Lisa Hughey is a USA Today Bestselling author for a reason. Sometimes, you can tell that even though the author has that title, she rode someone else's coattails in an anthology or something. Hughey is the real deal, with an engaging voice and style that sucks the reader right in and refuses to let go.

This is one of those series where each book is a standalone that you can read one and never read any of the others, and never miss a thing. Set at Camp Firefly Falls, a summer camp out in the wilds of Western Massachusetts. The stories are all set in the present, but start off in the past, when the characters were younger and at camp as either campers or counselors.

Or both, as in this particular novel.

Diego Ramos was a fifteen year old counselor, who took the job in order to pay for a new muffler for his beloved classic muscle car. With his hard scrabble background, he spent a great deal of that summer feeling sorry for himself and his lot in life, especially since he was interacting with spoiled rich kids on a daily basis. Then one particular interaction changed the course of his life.

In the present of the novel, Diego is the successful CEO of his own company, back at the reopened camp for a corporate retreat that's supposed to help facilitate his merger and propel him into the billionare club.

Penelope Hastings was a nine year old camper when she first met Diego. He opened her eyes to the poverty and need she never saw in her rich, spoiled daily life. An important lesson for her to learn, as it turned out. In the present of the story, she owns a farm in Wwestern Massachusetts, and is championing a startup she created to pair corporate gardens with food banks. The newly reopened Camp Firefly Falls caters to corporate retreats, and the owners agreed to let Penny practice her corporate pitch on the "campers."

Sparks fly when Diego and Penny reunite, but each needs to get over preconceived notions, and each is shocked to realize the profound impact their one interaction from long ago had on each of their lives. But there is more between them than history... The chemistry and sheer electricity sizzles off the page. The sex scenes are steamy and the one by the campfire made me crave s'mores for the rest of the day...

This is a well plotted, well paced and fast read, a perfect summer romance read for anyone who's ever been to summer camp as a kid. I totally loved every minute of this story and give it 5 enthusiastic stars in every category.