#New Release from Abigail Owen! THE BOSS is available today! 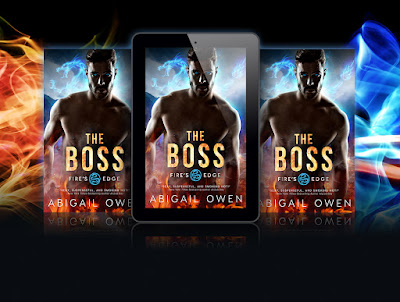 I'm so excited to be part of Abigail Owen's release blitz today! Her latest book from Entangled Publishing sounds AWESOME, and even better - there's a free prequel available to download too! First things first, here's the blurb about THE BOSS:


Finn Conleth leads his team of enforcer dragon shifters with an iron fist and a cold heart. Every dragon seeks his destined mate, but the process to turn the woman he once thought was his killed her and devastated him. He will never risk his heart again. His team is his family now. When his body eventually gives out, he’ll leave, living his last days alone.

Delaney Hamilton moved across the country to escape the freak fires that plague her. But when another suspicious fire erupts and rapidly escalates around her, her hopes for a new life go up in smoke. She has no choice but to turn to the mysterious men who come to her aid.

Finn knows the fire is dragon-caused, which puts Delaney’s problems directly in his jurisdiction. No matter how her wounded grey eyes call to every part of him, he refuses to risk her life in the mating process.

Until another dragon threatens to claim Delaney for his own, and Finn has to sacrifice everything to keep her alive...

GRAB YOUR COPY ON AMAZON TODAY


Here's the info to grab the prequel for free: 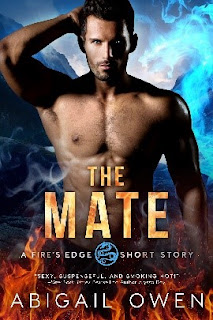 Maddie Thompson’s life just fell down a rabbit hole. Finding out she's a dragon shifter was one thing—she never quite fit into the human world, and this new reality feels…strangely right. However, discovering the next step is to choose a mate, and if she chooses wrong she'll die, is the other side of crazy. Especially when she already left a piece of her heart with someone who didn't want it.

To say dragon enforcer Fallon Conleth was shocked when the Mating Council summoned him as a potential mate for a newly found dragon doesn’t quite cover it. A mate is rare and precious and many dragons never find theirs. Fallon isn’t sure he’s worthy of the honor, not when so many deserve it more. He’ll just go through the motions and return home alone…until he sees Maddie. The human woman he reluctantly let walk away.

Fallon already broke Maddie's heart once, but if he can't convince her that they're meant to be, she'll die... and he won't be far behind.

Not convinced yet? Here's a tantalizing excerpt from THE BOSS...

No way was she misinterpreting the need reflecting back at her.

Say it, she silently urged. Too proud to beg out loud. Do something.

“What do you want, Finn?” she repeated.

He tipped his head down, though his gaze remained on her, but the light in those blue depths shifted, turning from banked need, held ruthlessly in check, to a possessiveness that drew her body into aching awareness.

He pulled lightly on her wrist, drawing her across what had been an impassable chasm of space, until she was flush against his hard body. His other hand came under the fall of her hair to rest against her neck.

She didn’t look away, not even as he lowered his head, his movement agonizingly slow. His mouth only a whisper from hers, he stopped.

Finally. She had no idea if she closed the distanced between their lips or if he did. She only knew that she was getting exactly what she wanted.

Sensation forced her eyes closed as the heat of him seeped into her skin, her body flushing with it, swamping her senses. Their tongues tangled, his mouth hard and urgent against hers, like he couldn’t get enough, like he needed to possess her. The speed of her body’s reaction was so fast, so immediate, that she went dizzy with the need, like looking over the edge of a terrifying drop.

She was too out of her element, too out of control, but she didn’t want to stop. She wanted more.

He released her wrist, wrapping his arm around her waist, her softness yielding to his hard body as he held her closer. At the same time, he loosened his grip on her neck, brushing over the sensitive skin at her nape with his fingers.

Shards of electricity zapped from that simple touch directly to her core, which throbbed in response. At the same time, warmth from that touch spread through her on a wave of a feeling akin to total acceptance. Like this was where she was supposed to be. A low moan dragged from her mouth as he lifted her, just enough that it put him in complete control. He slipped a thigh between her legs, then pressed her down.

Delaney leaned into him, her body softening into his, attuned to what his wicked hands and lips were doing to her even as her heart beat fast has hummingbird’s wings just to be in his arms. She arched into him, moving against him with a moan.

His hand slid under her shirt and he brushed against the sensitive flesh at her waist, his skin warm against hers. Which only made her want more skin.

With eager hands, she tugged at his black t-shirt, breaking their kisses only long enough to pull it over his head. Then she allowed her hands to roam, to feel the rigid strength in his body, loving the heat of him, the bourbon and Coke smell of him.

A shudder shook his body. “I want you.” He paused, then said something else under his breath. Something like, “More than I should let myself.” But then his lips were back on hers, addling her senses and taking over her mind.

A bellow rent the air and jerked Delaney out of the oblivion of pleasure where she floated. She snapped her head up, breaking the kiss to listen. Another sound that she could only classify as a roar broke the stillness.

“What was that?” she asked. Fear, rather than need, had her heart tripping over itself inside her chest. “It sounds like a…wounded animal.”

Finn gave a low rumble that sounded more like a warning growl than anything a human would make, and her heart slammed into high gear. Slowly, dread pulling at her, she turned her head to look directly at him.

What the hell? Panic spiked inside her, and her breath came out in short, sharp bursts, speeding up as she absorbed what she was seeing.

Adrenaline joined the fear and she shoved his chest. Hard.

She must’ve surprised him, because Finn released her, stumbling back a few paces. She managed to keep her feet under her, then scrambled back, trying not to trip over any rocks in her path.

She did the only thing she could. She ran.

GRAB YOUR COPY ON AMAZON TODAY
Posted by Katie O'Sullivan at 6:30 AM