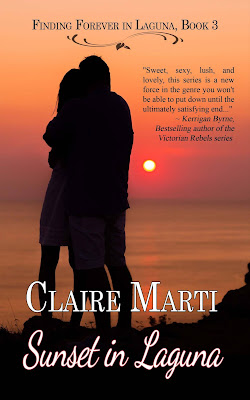 
Returning to Laguna Beach after four tours in the Middle East, Christian Wolfe leaves the military behind and buys a wine bar, vowing to keep his life simple. He fights to keep his devastating PTSD a secret and refuses to burden anyone else with his baggage. When stunning Kelly Prescott and her red stilettos saunter into town, she drives him past the bonds of his self-control.

Successful in her father’s stuffy law firm, Kelly’s too compassionate to survive in the cutthroat world of corporate litigation. Leaving behind both family and courtroom drama, she moves to Laguna to become general counsel for a nonprofit veterans’ organization.

She didn’t bargain on a gorgeous modern-day Heathcliff, and in Christian, she sees another kind of challenge—one she can’t resist.


My Take:
This is the story of two broken people looking for second chances, who would be perfect for each other if only they could trust. Honesty and trust are two of the hardest things in any relationship, and you can't have one without the other. Claire Marti weaves a second chance romance with lots of heart, a little humor and a whole lot of heat. And puppies. Did I mention the puppies? Definitely a good summer read!

Kelly Prescott is a high powered attorney but unhappy with the trajectory of her life. Working in corporate litigation is lucrative but unsatisfying. She wants to jump off of the fast track at her father's firm and switch to a nonprofit practice helping people, not profit margins. Peaceful Warrior is a veterans' organization in Laguna, the coastal town her best friend recently moved to.

Christian Wolfe owns an upscale wine bar in Laguna and is part of Kelly's circle of new friends, but the retired Marine has dark secrets. Beneath the sophisticated charm and devastating good looks lurks a severe case of untreated anxiety and PTSD from his tours in Afghanistan. As much as he's attracted to Kelly, his irrational fears won't let him get too close. The nightmares are not only embarrassing, but could be physically harmful... and although he thinks about seeking treatment to get over the haunting memories, deep down he doesn't feel he deserves happiness because of his perceived failures in leading his unit during combat.

Despite her intelligence and beauty, Kelly has her own self worth issues, caused both by her father and former boyfriend, a fellow lawyer at dad's firm. She also feels responsible for her brother's death, which is the main reason she stayed a corporate lawyer as long as she did. She wants to help people, but as she gets closer to Christian, it's that very instinct that has him pushing her away. He doesn't want to be her "project" or the object of pity, he wants to be her equal.

I loved how the author infused her story with reality, about the real issues faced by our returning soldiers, and some of the ways society can gently help. The rescue-dogs- for-vets program Marti describes is such a wonderful idea, one that should be adopted across the U.S. The scenes describing Christian and his new-found friend, --a Pug and not some big, masculine dog breed  -- are simply wonderful.

While this is the third book in the Laguna series, each can be read as a standalone, with the characters and story lines fully fleshed out, and each satisfying on its own. You can start with any of them and enjoy the stories just as much, although I personally read them each in order. Whatever. All I'm saying is all three are excellent beach books, each character with their own issues to overcome. If you enjoy second chance romance, then check out Claire Marti.

Grab a copy of SUNSET IN LAGUNA on AMAZON