Here there be dragons... 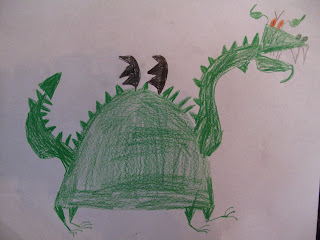 Cape Cod Weather Today: Overcast and wet, with a severe weather alert warning, for thunderstorms and high winds. It's foggy and 46 degrees. Not a good day to walk on the beach, but a good day to write....

In the middle ages, cartographers mapped their known world. Not the whole world, just what was known at the time. They didn't know what lay beyond the horizons.

Instead of admitting they didn't know what lay on the other side of that body of water or over that mountain, they'd write "HERE THERE BE DRAGONS," or something similar. They couldn't be faulted for not knowing what else was over that mountain when there were dragons living there, right? I mean, it's not like they can get past the dragons just to map the other side. Sheesh. They're dragons. Big. Mean. Dragons.

But eventually, someone would decide to go over that mountain, or cross the ocean, and find out what was on the other side. When they succeeded, people said "HE was LUCKY the dragons didn't get him."

There's an interesting article in this month's Romance Writer's Report (the RWA magazine) by PRO liaison Sherry Davis. It's entitled "Making Your Own Luck."

She first defines luck as "an unknown and unpredictable phenomenon that leads to a favorable outcome." Like, who could have predicted that the dragons had left the area? Isn't that lucky he didn't get eaten!

She also quotes the Wikipedia definition of luck: "Luck is probability taken personally."

That struck a chord, and I had to reread it a few times to let it sink in. I know that in writing, as in life, Luck has a lot to do with Success. Being in the right place at the right time. Listening to your angels when they speak. Probability. Numbers game. Avoiding the dragons of despair. When you think it's directed specifically at you, it's lucky. Or unlucky, as the case may be.

But there is something to be said for making your own luck, as Davis goes on to write about. She lists her five "things you can do to ensure you've given luck a chance to happen." Things like do your research and know the current market news. These are good advice for any job market, not just publishing. Especially in the current economy when there are so many out there, looking at so few opportunities. But Publishing has always been that way. Many more people who think it would be easy and cool to write a book than there are opportunities to be published.

Her last point is "Write, write, write." Once you've submitted, don't wait to hear back. Keep writing. Start something new. This is the problem I'm having at the moment. Keeping the writing momentum going, while I wait to hear on the two projects I have out at the moment, and the book revisions I was expecting back from my editor this week.

I need to get past the dragons and map new territory. And make my own luck.
Posted by Katie O'Sullivan at 8:27 AM