Friday Feature: Life at the Beach 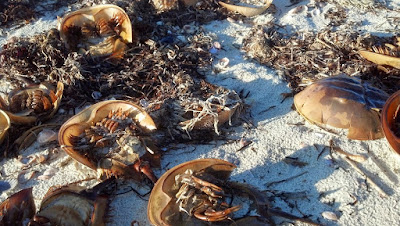 Without a doubt the number one Nature question concerned people ask during September:
What's up with all the dead crabs on the beach?

A disturbing sight to see dozens or sometimes hundreds of unmoving creatures. Thankfully, the answer has nothing to do with a loss of life. Quite the opposite, it's all about a continuation of life.

Most of the "dead" crabs people see on beaches this time of year... are probably not dead at all, but actually empty shells. The shells are molts. Horseshoe crabs grow by molting.

As the crabs grow and mature, they shed the old exoskeletons (outer shell or skeleton) and form new, bigger ones, leaving its old shell behind. The animals increase in size by 25-30% with each molt.

It doesn't take long for the old exoskeleton, including tail, legs, abdomen, gill coverings, eye coverings, and everything else, to wash ashore for curious people to stumble upon. Although some crabs might be dead and in the mix along the strandline, most of the time these are empty husks. Horseshoe Crabs need to shed at least once a year as they grow to adulthood.

It can be a difficult task to tell an empty molt from a lifeless crab. A molt is often one intact piece of shell appearing just like a complete crab. Some of the molts may even fill up with sand or water to make the empty shell weigh about the same as a whole crab. It's surprisingly easy to mistake a molt for a dead Horseshoe Crab.

With careful observation, though, it can become easy to find the truth. Pick up the shell and look for an opening or split along the front ridge of the shell. If the seam is broken, then in all likelihood it's a molt. Unlike a true crab, like a Blue-claw Crab, which will back out of its old exoskeleton, a Horseshoe Crab will thrust forward to divide the upper shell with the bottom half. 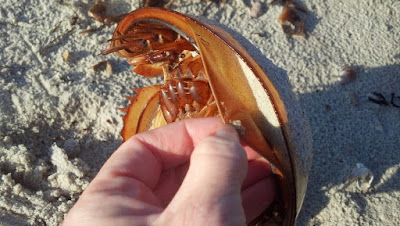 Also, the color of the shell is going to be pale and in some cases nearly translucent. In contrast, a dead crab is going be dark in color and have a strong saltwater-stench with many flies or gulls being attracted around the poor creature.

While there is still a lot of mystery about the juvenile life stage of Horseshoe Crabs, scientists are pretty sure that many young animals tend to stay near where they hatched for their first two years and then gradually move to deeper waters of the bay as they mature. Scientists are also pretty confident that many crabs of the same age molt at the same time of the year.

Which explains why it often looks like Horseshoe Crab Armageddon along my beach in September.  It's not. It's just the circle of life.
Posted by Katie O'Sullivan at 5:00 AM